“Remain” maintains its lead but gap over “Leave” narrows

In new polling on behalf of IG Group (Survation’s third EU Referendum telephone poll of 2016), “Remain” continues to lead; however, support for “Leave” has risen 2 per cent since our last poll on March 24th and four points since Survation’s initial telephone poll of the year on February 20th, after David Cameron’s EU Renegotiation announcement.

Survation interviewed 1,003 adults aged 18+ across the UK on behalf of IG Group by telephone from 25th-26th April 2016 on the question:

Results are as follows with changes from the previous Survation poll (24/03) in brackets: 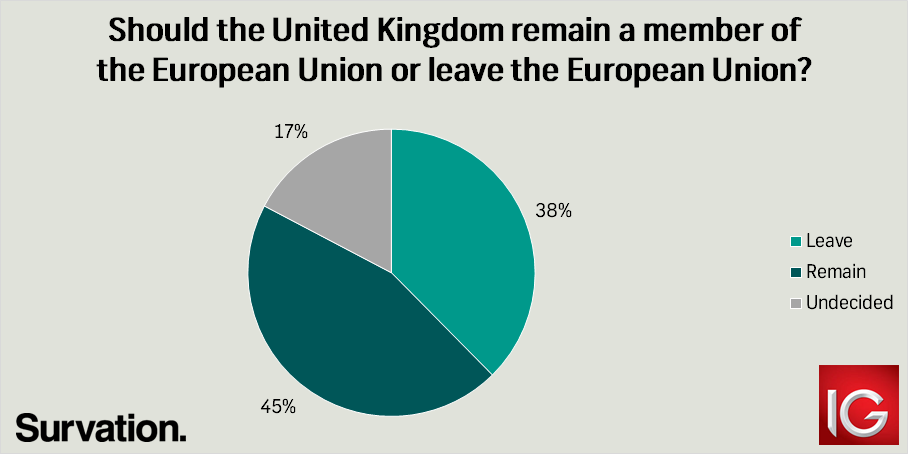 Voters in the sample who initially told Survation they were undecided were then “squeezed” with the question:

Some of these undecided respondents then stated a preference for leave or remain after this “squeeze” question. Adding back these respondents to the initial voting intention has the effect of a slight (1%) boost to Remain:

“We’re very pleased to begin our partnership today with IG ahead of the EU Referendum, publishing regular polling results with a consistent methodology that will enable IG’s clients to observe public opinion trend from our work in February up until the week before polling day.

As we saw in both the 2011 Alternative Vote and 2014 Scottish Independence Referendum, public opinion in such referendums has been subject to change from the effect of rival campaign activity, televised debates and other events that can swing public opinion. Survation’s series of polls for IG should be of interest for all those keen to consider what the UK will decide one way or another on June 23rd.”

Full data tables for this polling can be viewed here.

IG’s EU Referendum Barometer is still indicating victory for the Remain campaign, predicting a 73% chance that the UK remains within the European Union. The Barometer is an indicator of what those traders are predicting will happen in the 2016 UK referendum on membership of the European Union. The data is based on the political binary market IG has created for clients to trade on. 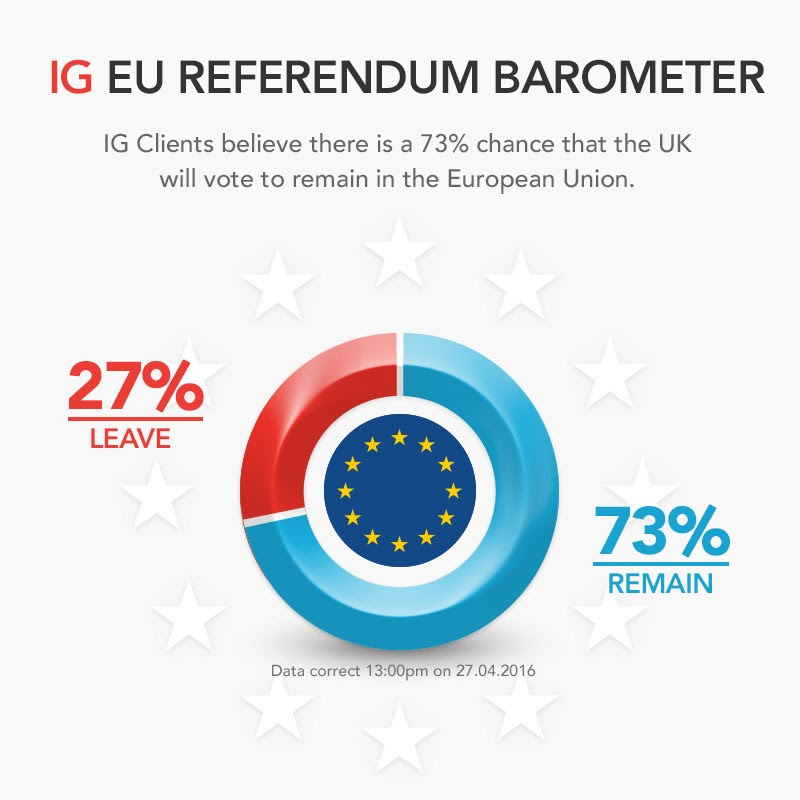 Matt Brief, Head of Dealing at IG said:“The IG barometer is showing a 73% chance that the UK votes to remain in the EU. While the IG/Survation opinion poll is giving a snapshot of voting intentions from the last two days, our binary market (barometer) is a forward looking estimate of the likelihood of each side winning. IG clients have a history of predicting referendum and election results correctly such as the Scottish independence referendum, and at present they have REMAIN as strong favourite.”