Most children have experienced bullying at school, according to a Survation poll on behalf of the Diana Award. Sixty percent of 11-16 year olds reported having been bullied at school at some point in their lives and, as children prepare to begin a new academic year, almost half (46 percent) have worried about returning to school after a holiday because of bullying. A significant minority (28 percent) of children say they have faced bullying on social media.

Worryingly, 38 percent of kids who had experienced bullying said the experience had impacted their attendance at school. Seven in ten victims (69 percent) thought bullying had adversely affected their mental health, and 59 percent had struggled to sleep at night. A quarter (25 percent) had contemplated self-harm, and 20 percent said bullying had made them feel suicidal. 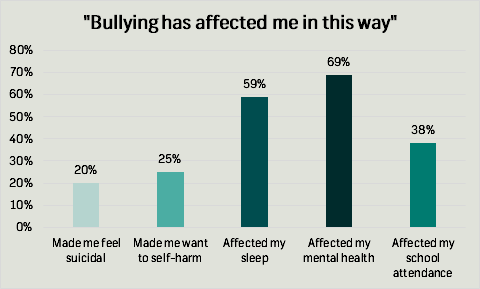 Survation polled 1,003 11-16 year olds living in the UK on behalf of the Diana Award. Fieldwork was conducted 7th-13th August 2018. Tables can be found here.

Would you like to have your own views represented in Survation’s work? Survation’s paid consumer opinion panel is now live. Go to https://panel.survation.com/ to join.

To say thank you, you’ll receive 50 points (50p) for registering and 100 points (one pound) when you complete a very short welcome poll on the panel dashboard.

Please let us know what you think – we’d love to hear your feedback.