Amid High Level of Concern, Cross-Party Support For Strong Action On Ukraine.

Survation carried out polling of the UK population to gauge current voting intention and views regarding the current Russia-Ukraine crisis. The fieldwork, carried out between 17th and the 21st February 2022, indicates a 7-point Labour lead – up 2 from the previous polling conducted on 25th January 2022. The Conservatives have seen no change in their support. 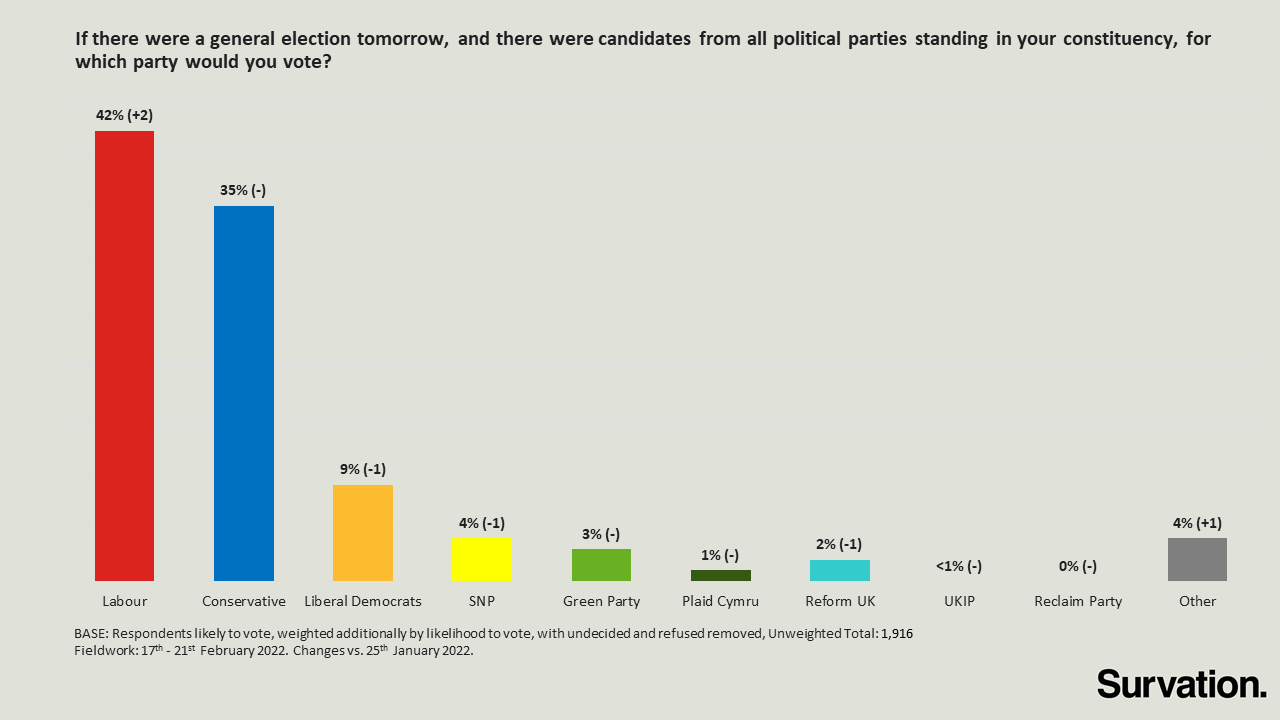 Boris Johnson’s approval rating has improved by +5, but are still near their historic lows – a negative 30% net approval, from -35% in January’s polling. Keir Starmer’s rating has also fallen slightly in the past month by two points to -6%. 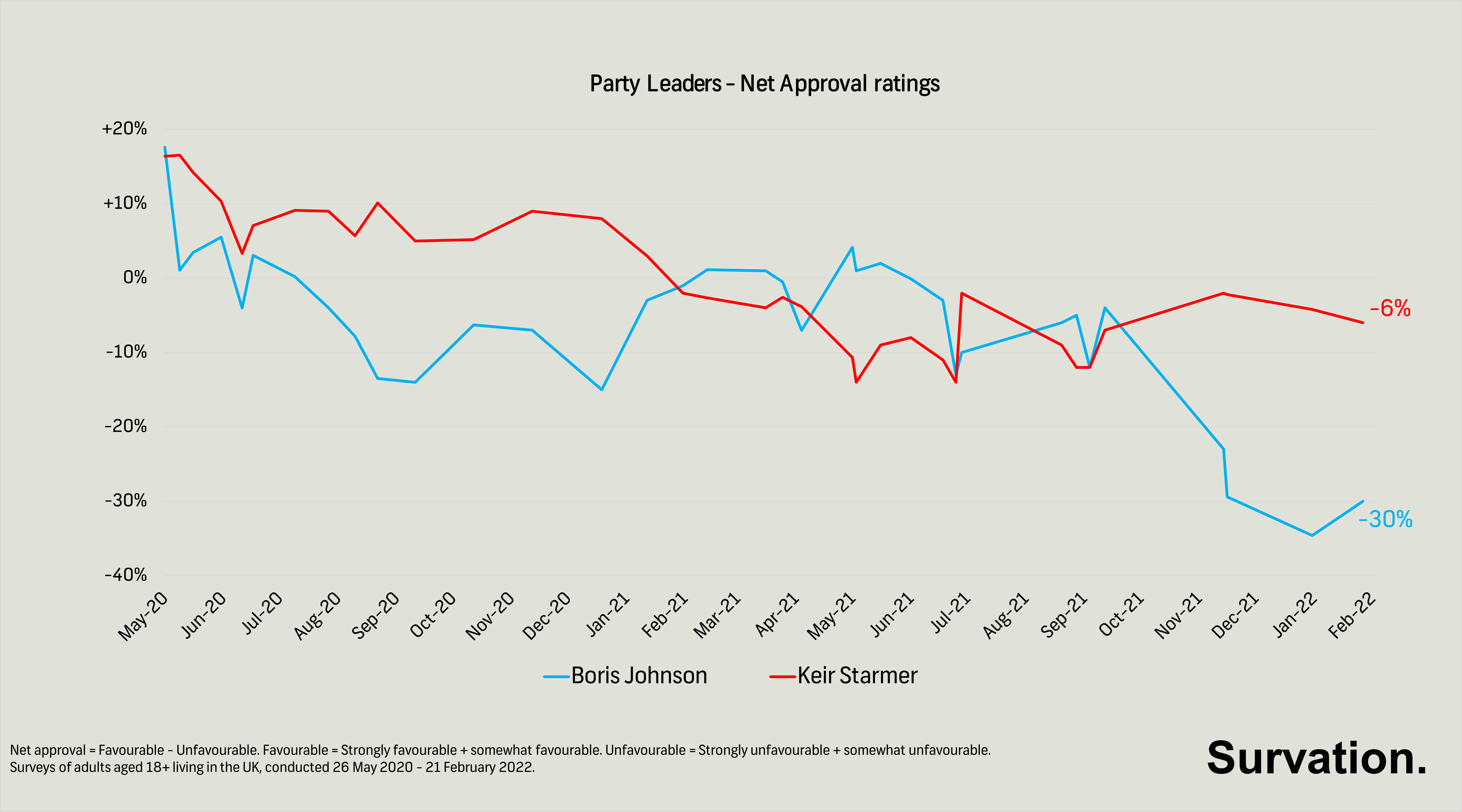 Keir Starmer has maintained a lead over Boris Johnson (gained amid the initial “partygate” affair) on the question of ‘who would make the best Prime Minister?’ – currently standing at 5 percentage points.

Attitudes towards the Ukraine Crisis

Prior to the other questions on the Ukraine crisis, we kicked off the polling with an update on attitudes towards NATO in comparison to polling conducted in May 2019. This showed a 7 point drop in the perceived importance of NATO for UK national security. However, with 77% of respondents still perceiving NATO as important to national security, there is still strong support for the organisation. 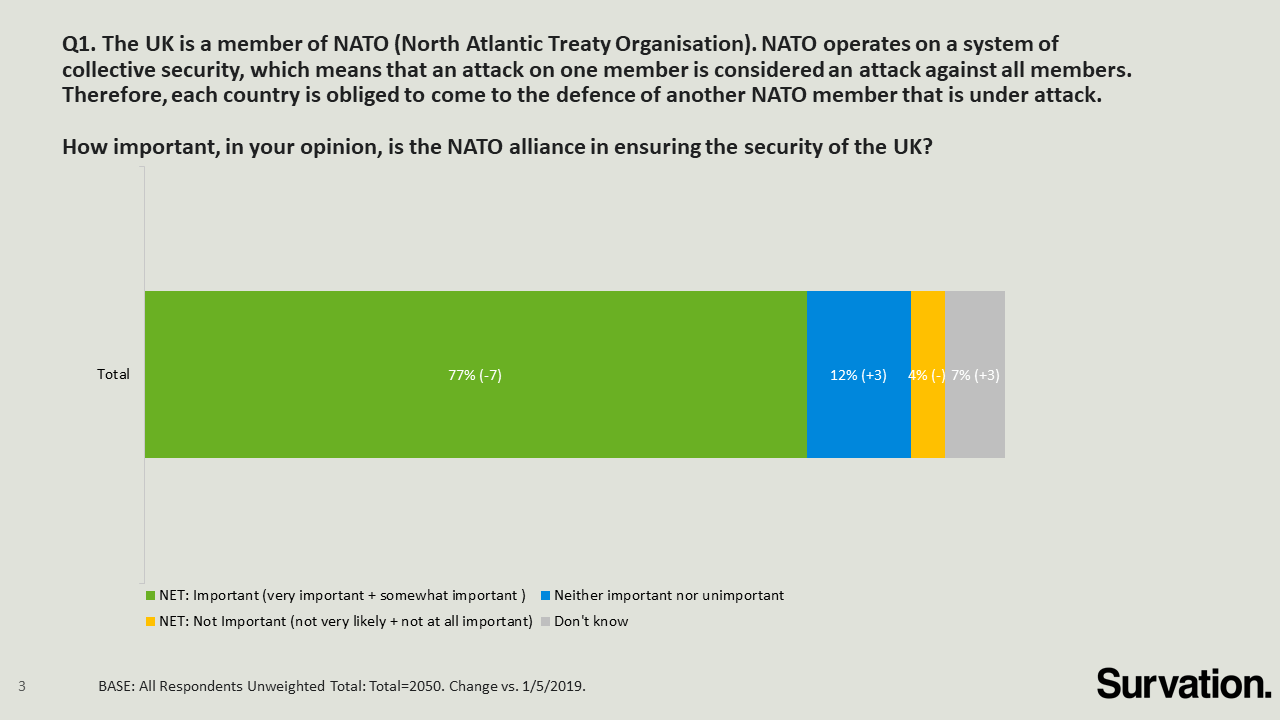 A sizeable majority (69%) of the British public told Survation they were concerned about the ongoing crisis between Russia and Ukraine, just 11% said they were not.

This polling, conducted prior to Putin’s decision to recognise sovereignty for the Luhansk and Donetsk regions of Ukraine showed strong and cross-party support for measures to reduce the amount of Russian money coming into the UK in the event of conflict escalation, and also support for such measures regardless of the current situation. 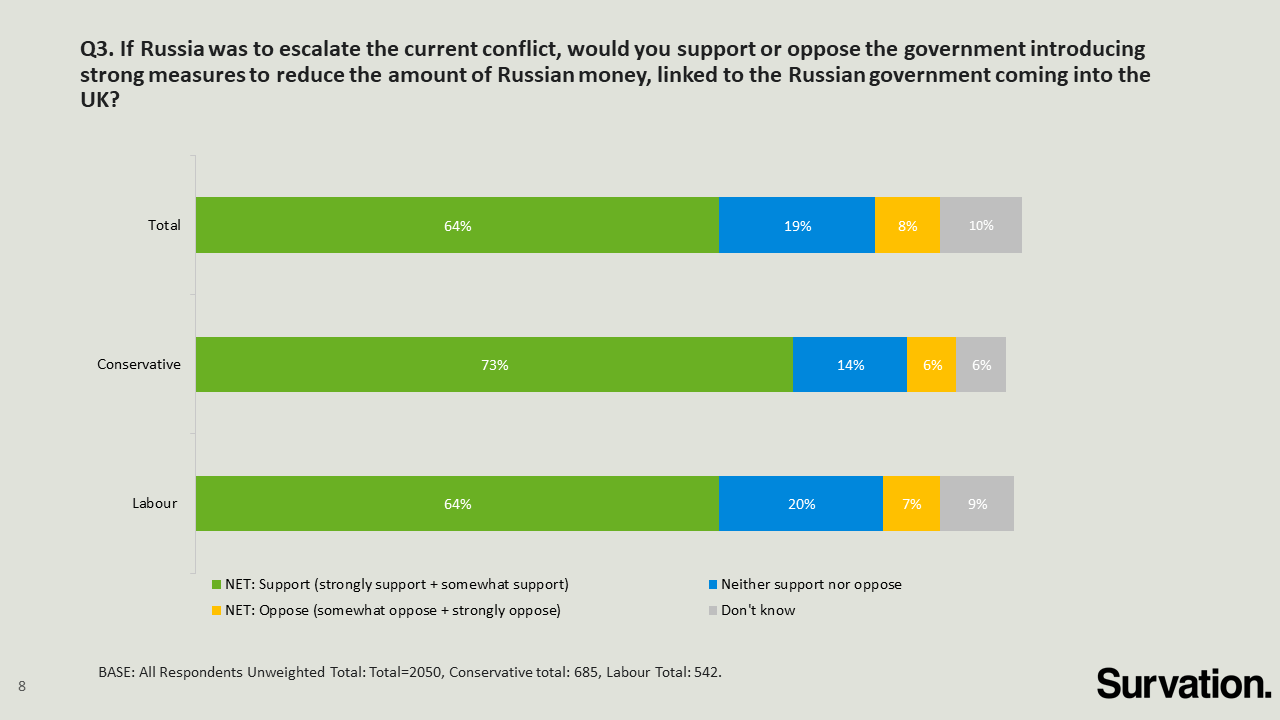 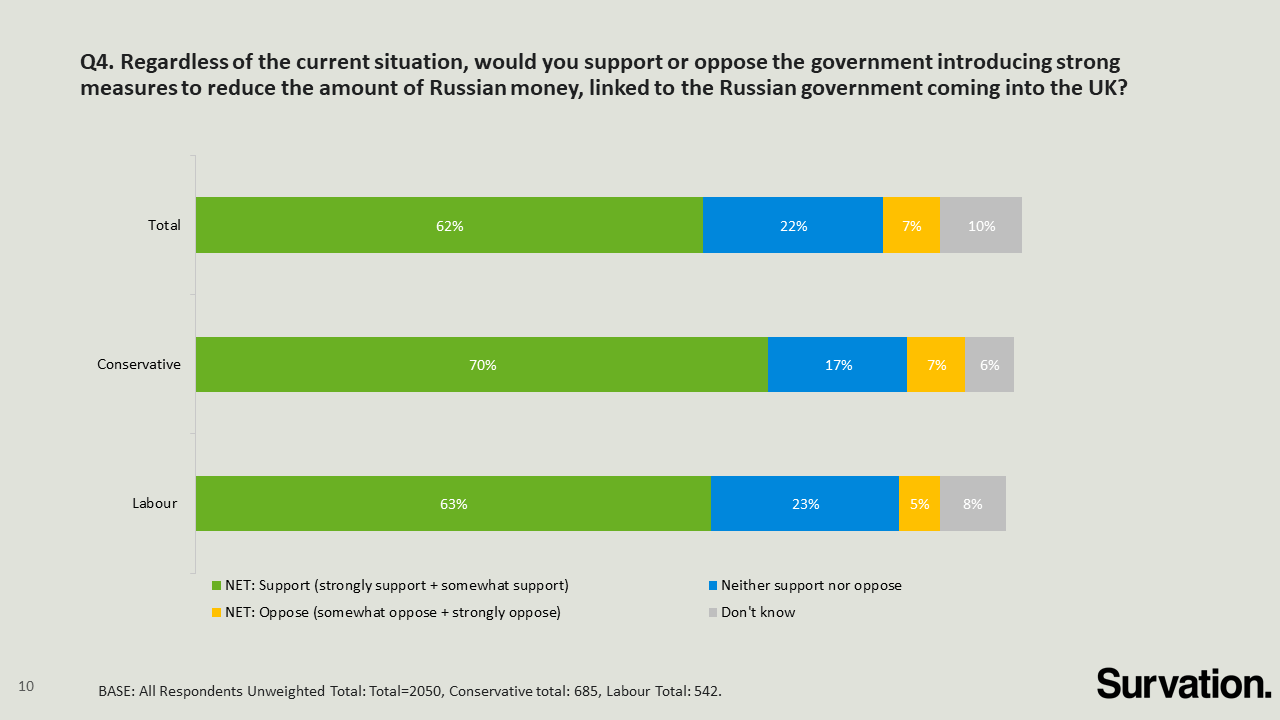 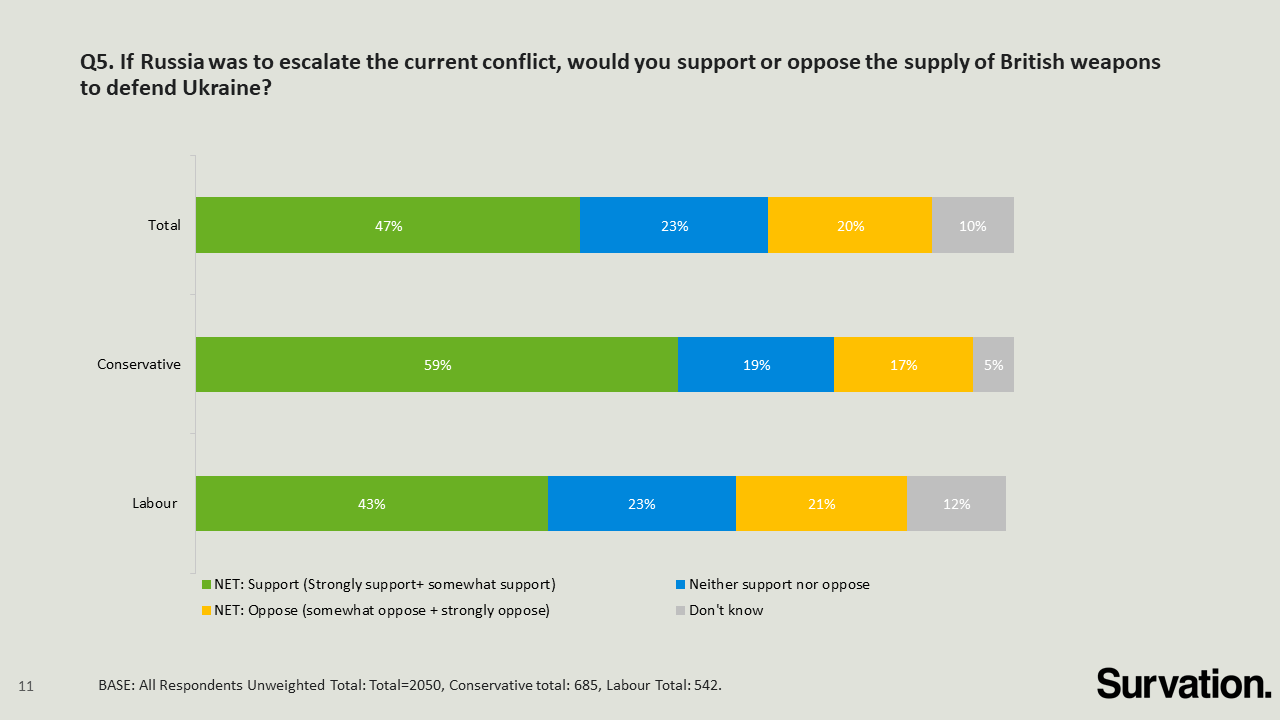 Only 37% of the public support the concept of direct involvement of British soldiers providing assistance in Ukraine.

The public are unsure about who they trust most to make the right decisions in relation to the UK’s involvement in Ukraine. Although Keir Starmer is ahead with 29%, Boris Johnson is close behind with 26% of people trusting him the most. Significantly, 32% of the public did not trust either of the party leaders in making the right decision. 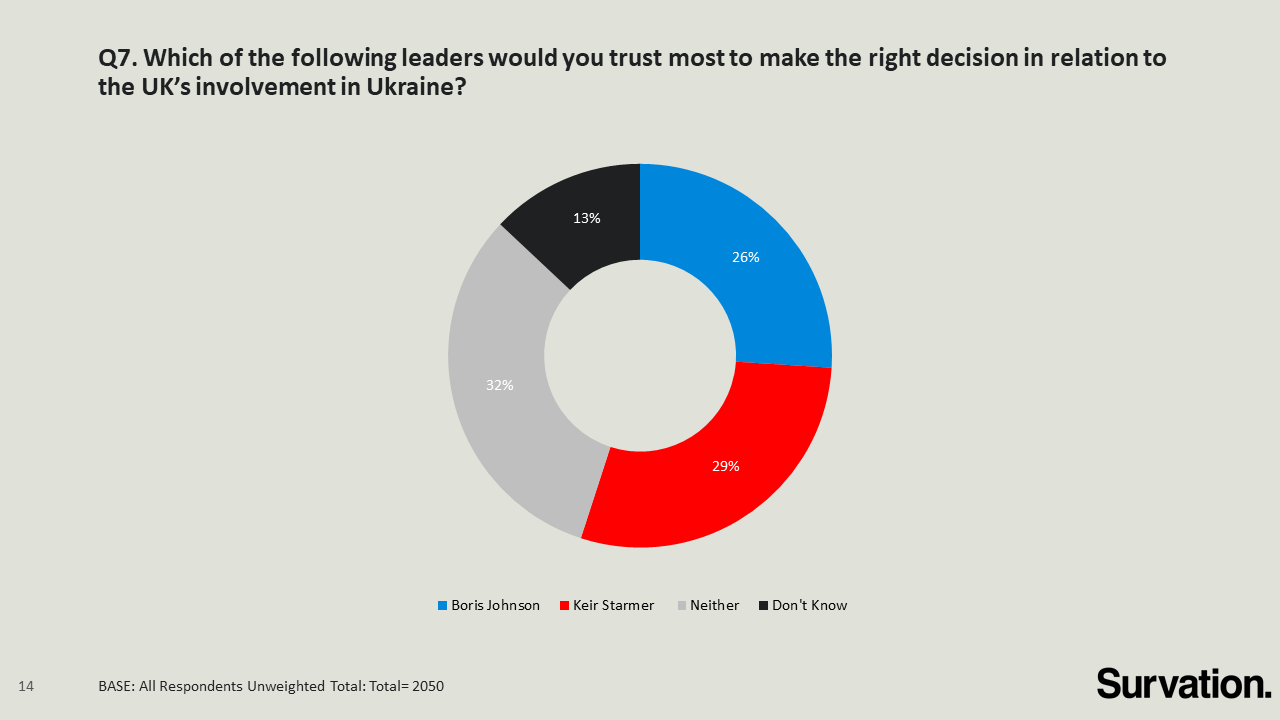