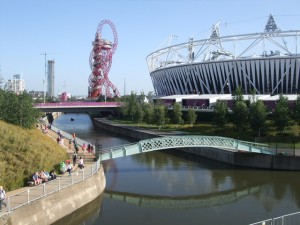 Respondents living in the East Midlands are the most enthusiastic about the Olympics overall- with 60.8% of those surveyed from that region expressing positive sentiments. Londoners were are also positive (58.9%), (but also expressed marked negative views also) as were people living in the North East (56.5%), however respondents from the North East were more likely to say they are ‘very excited’ (19.6%) than those living in any other region- including London (9.3%).

On the other hand, only 38.6% of Scottish respondents expressed positive feelings towards the upcoming Olympics, with not one person in Scotland describing themselves as ‘very excited’. In addition, Scots were most likely to describe themselves as ‘not looking forward’ to the Olympics (9.1%)  or ‘dreading the whole thing’ (12.5%) (21.6% in total – the highest overall region expressing negative sentiment, with Londoners coming in a close second (20.2%), followed by respondents living in the South East (19.1%).

Those aged between 25 and 34 were the most positive age group regarding the London Olympics, with 58.3% of respondents in that age bracket expressing positive feelings, and those aged between 35 and 44 following close behind at 57.1%.

Opinion among young people was notably polarised. They were most  likely to feel “excited” about the Olympics, with 42.6% of 18 to 24 year olds responding positively and 26.5% responding negatively, with the second most ‘negative’ age group (45 to 54 year olds) trailing behind at 19%.

To Join the Survation panel and be paid to express your views sign up here: http://survation.com/sign-up/