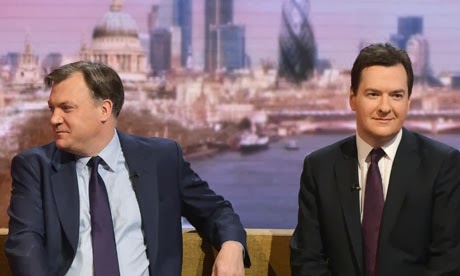 Balls vs Osborne – locked in combat – but is the winner “don’t know?”

Looking back at our polling over the last months we often ask the public the same question “Who do you trust more on the economy?” – perhaps one of the most important questions in deciding the outcome of the next election.

Attitudes towards the Government Poll, for the Mail on Sunday
5th – 6th April: sample size 1037

*Note: this question was worded differently to the others, asking do people trust “David Cameron and George Osborne” or “Ed Miliband and Ed Balls” to “lead the UK out of recession”

As can be seen, the fight between the Chancellor and the Shadow Chancellor for economic credibility, crucial to the message of both parties, has been extremely close ever since the Budget. In three of the six polls since then, the two men have been within 1 percentage point of one another – since May Balls seemed to be inching ahead, but even then his lead was well within the margin of error and the most recent update has Osborne fairly static but Balls dropping off slightly (but still within the margin of error).

The lesson to draw would seem to be that the battle between the Chancellor and the Shadow Chancellor is more one of unpopularity than of popularity, with around 45% of people consistently seemingly unable to say that they trust either of them. Ed Balls has never been particularly trusted on economic policy in polling and since the fallout from the Budget omnishambles and repeated U-turns, it looked like George Osborne might have been in danger of being trusted even less.

However it would appear from our most recent update that Ed Balls is failing to capitalise on this protracted period of unpopularity for Osborne – some food for thought for Labour strategists. If there is any trend developing from these figures the winner would seem to be “don’t know” – both men need to articulate more clearly what they stand for and what their message is, as a large proportion of the public can’t really call a difference.