The first poll of the Batley and Spen byelection on 1 July, has the Conservatives with a 6 point lead over Labour.

In our phone poll, the Conservatives are in the lead on 47%, up 11% from its 2019 general election vote share, and Labour on 41%, similar to its 43% winning share at the general election.

Although the voter intention lead for the Conservatives is relatively small, other indicators such as leadership and policy ratings, offer Labour few signs of encouragement. 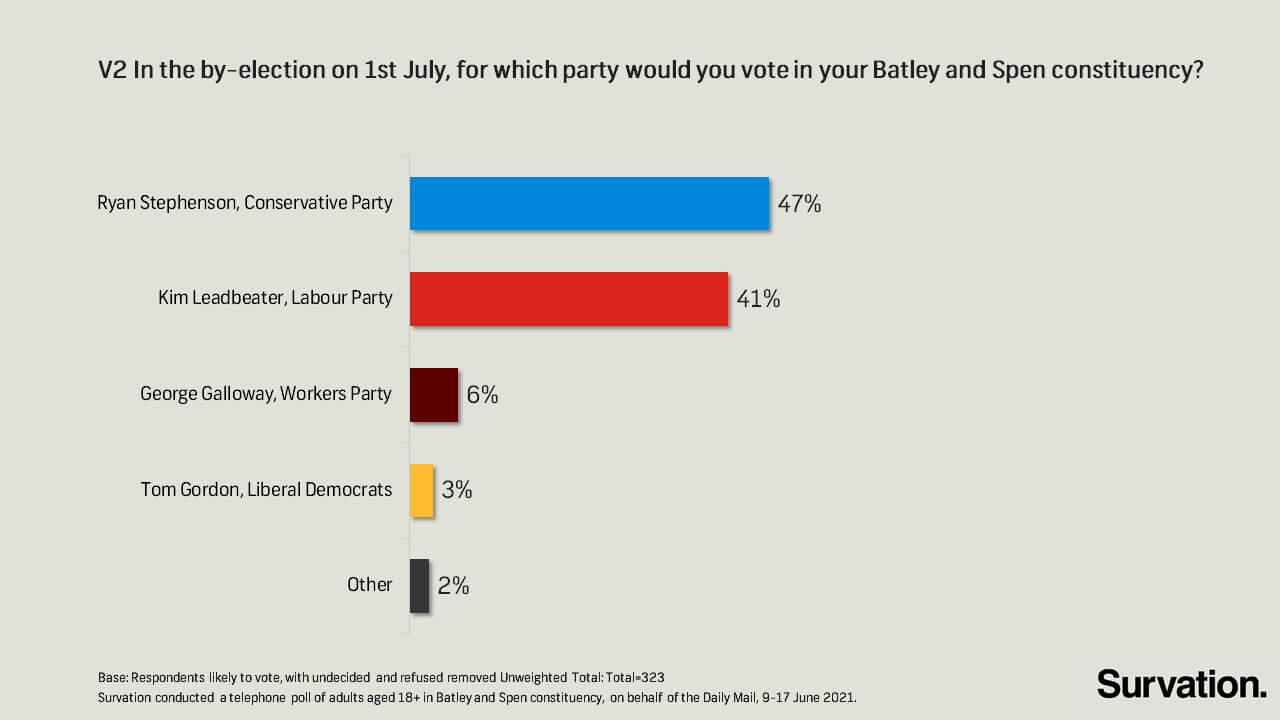 While the contest in voter intention is relatively close and voter swings could change the course of the final outcome. Boris Johnson has a strong lead over Keir Starmer among Batley and Spen voters on leadership approval.

Boris Johnson has a net approval rating of +18% while Keir Starmer is at -32%. While Johnson is more popular than his party in Batley and Spen, Starmer trails his party’s approval rating.

The Conservatives have a net favourability rating of +3, and with Labour on -17. 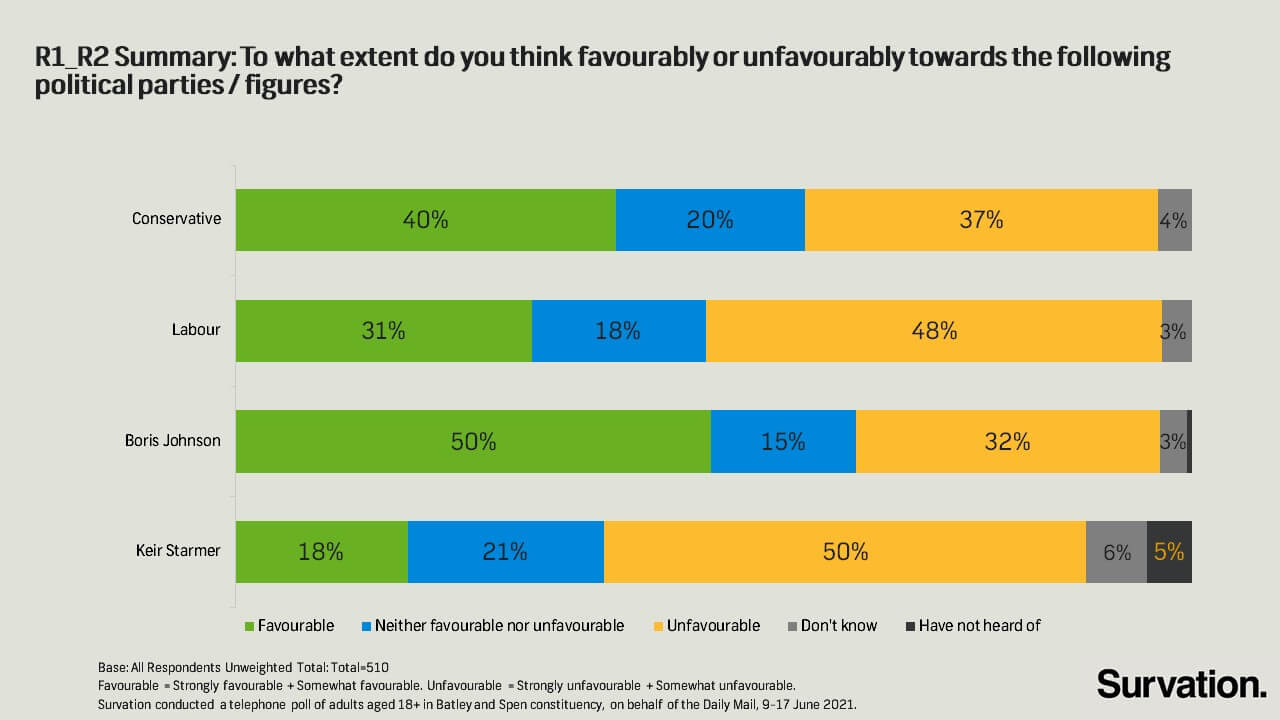 Boris Johnson also has a strong lead over Keir Starmer from Batley and Spen voters on who would make the best Prime Minister. Johnson is backed by 55% and Keir Starmer by 18%. 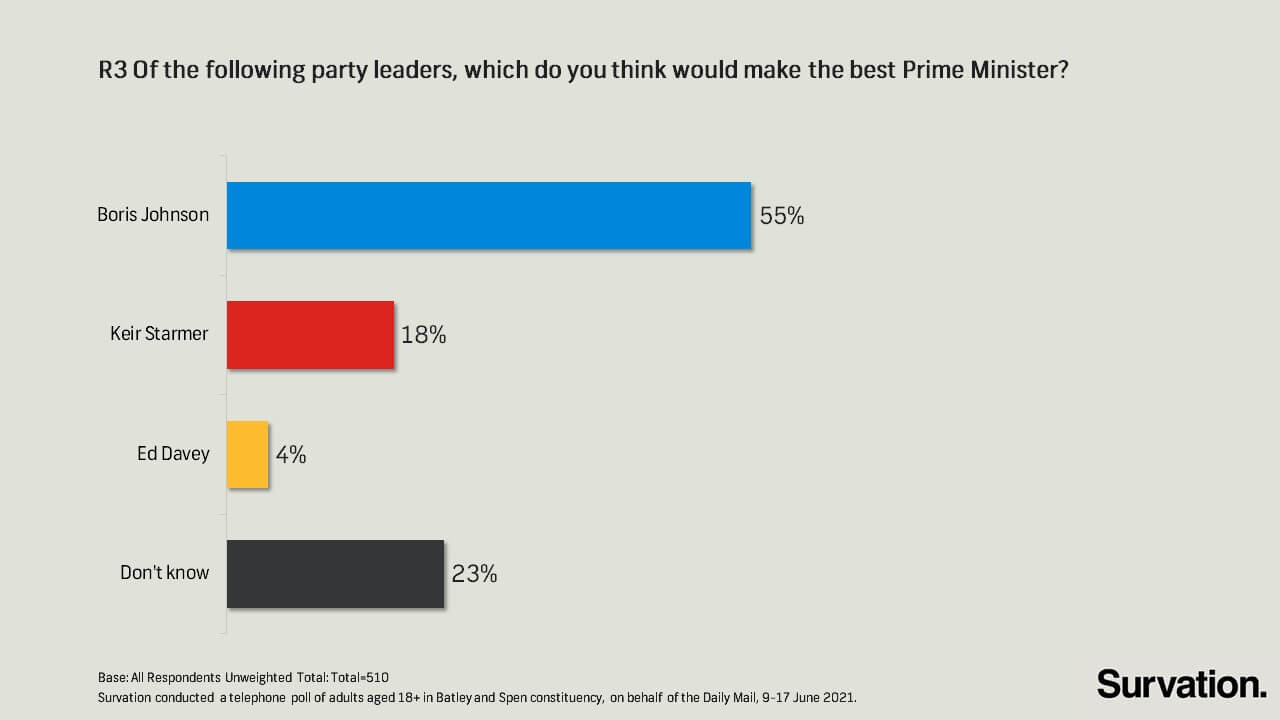 On leadership attributes, Boris Johnson is rated higher than Keir Starmer, including on trustworthiness, on all measures but Starmer leads Johnson on who understands working class people better. 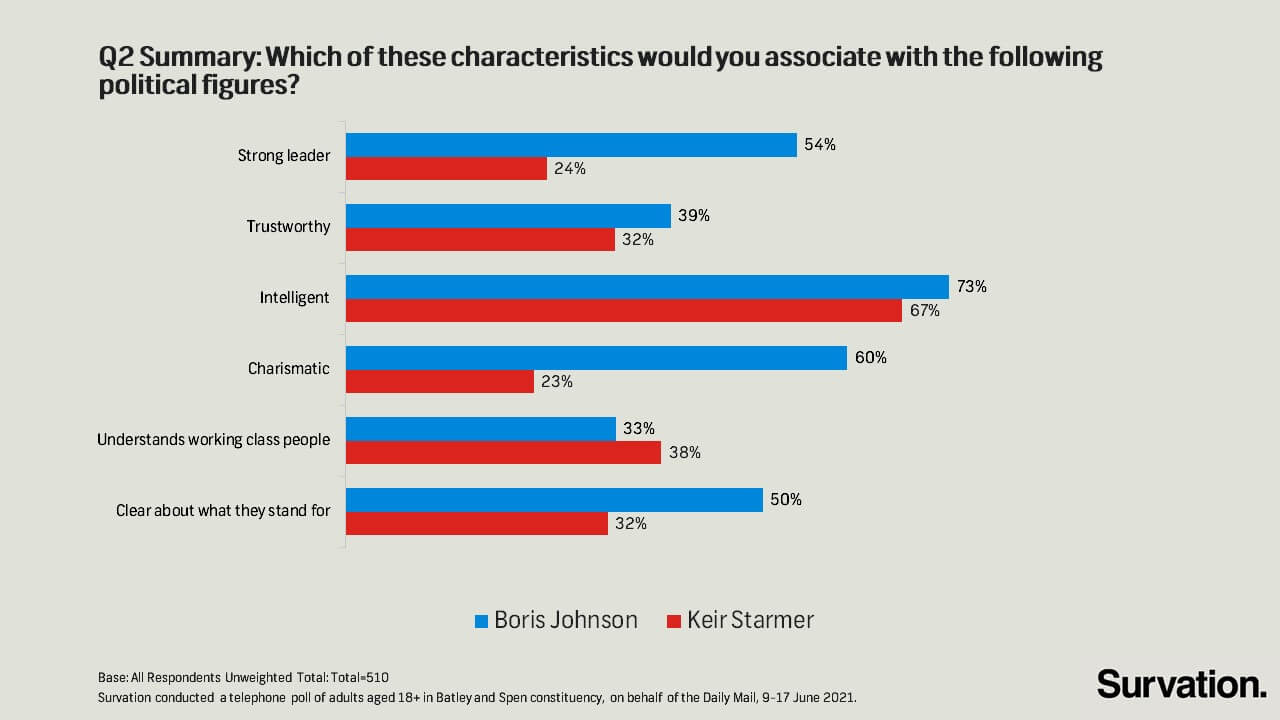 Similarly, Johnson has a lead over Starmer on trust on key policy areas, Brexit, COVID, the economy and the NHS. 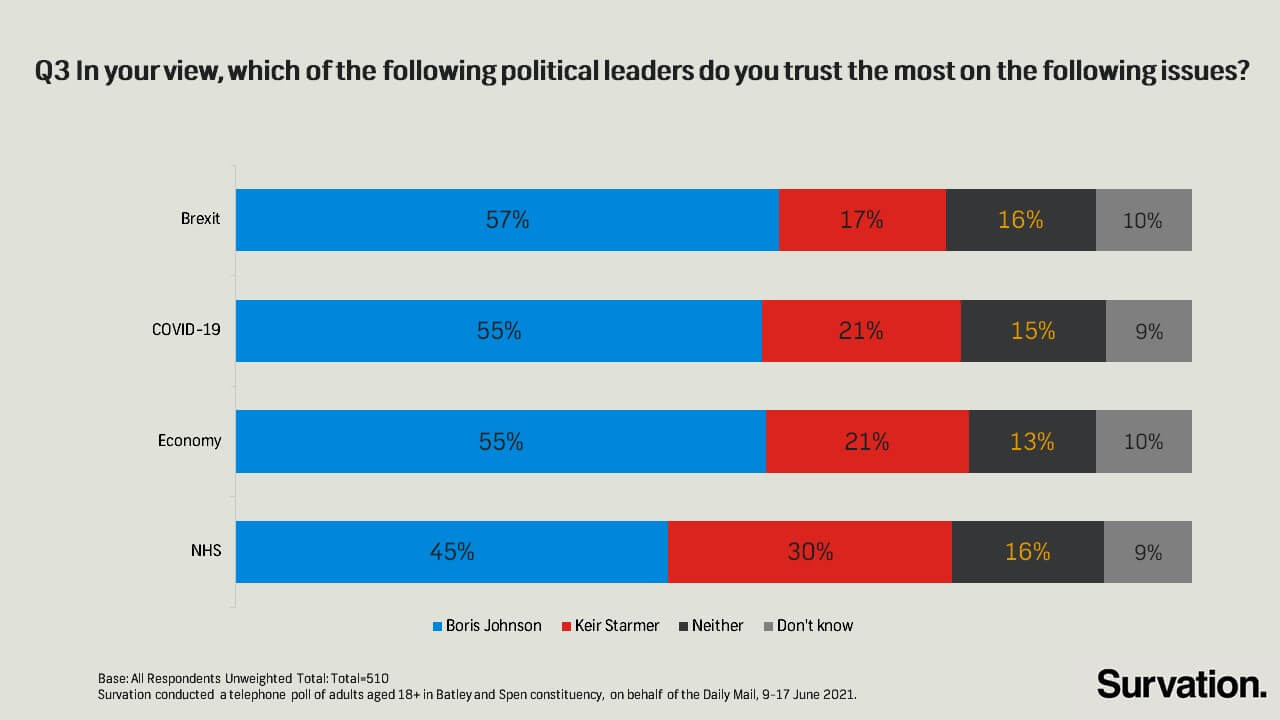 Boris Johnson, by 40% to 32%, leads Keir Starmer on who best represents the interests of the North. 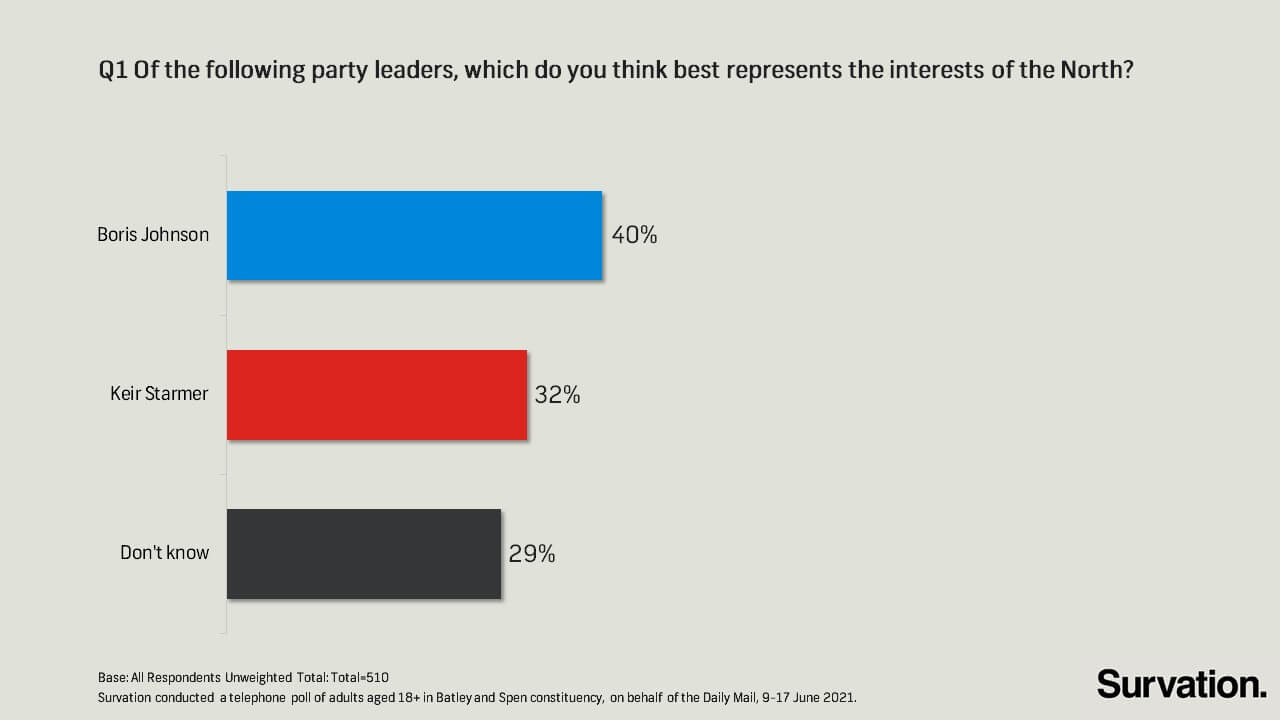 By 34% to 22%, with 33% saying it would make no difference, Batley and Spen voters say they would be more likely to vote for Labour in this byelection if Andy Burnham was leader of the Labour Party. 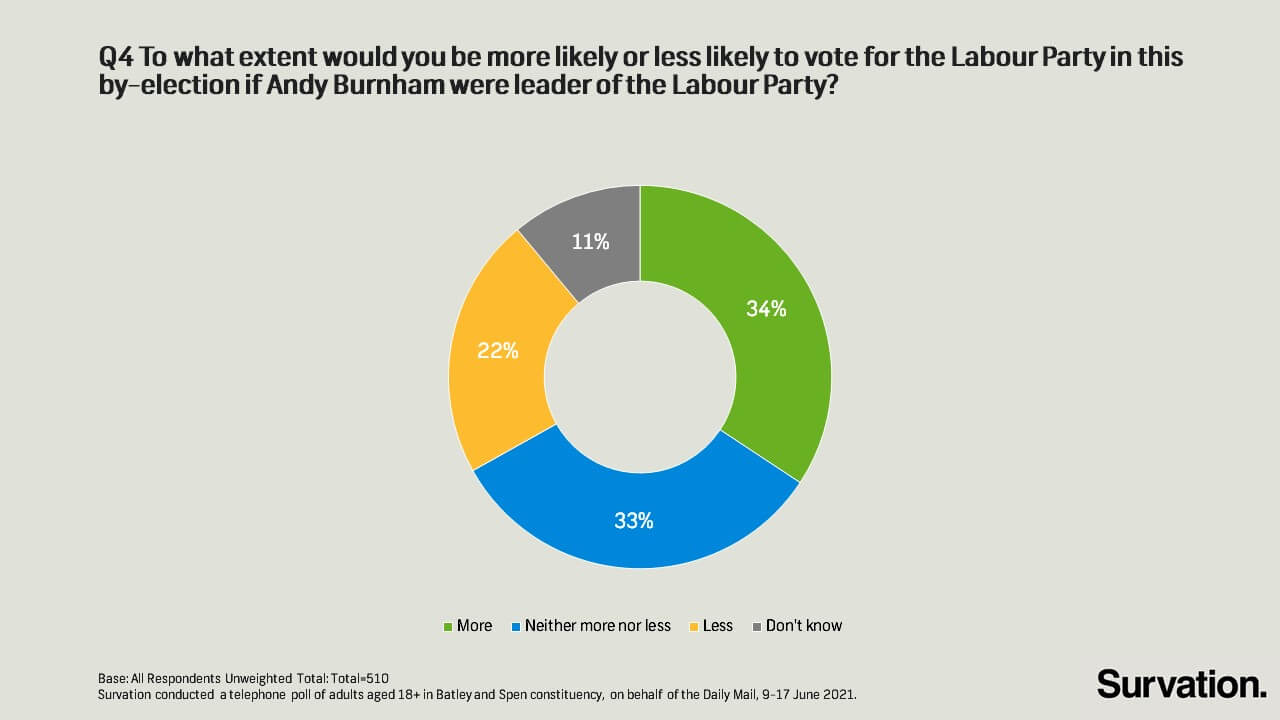 Survation conducted a telephone poll of adults aged 18+ in the Batley and Spen UK Parliament constituency, on behalf of the Daily Mail. Fieldwork was between 9-17 June 2021. Data tables are available here: