Damian Lyons Lowe leads this division of Survation. Damian is the founder and Chief Executive of Survation, a London-based market research agency and leading political market company.  Survation is a non-partisan polling company and work with various political parties and campaigns in the UK. 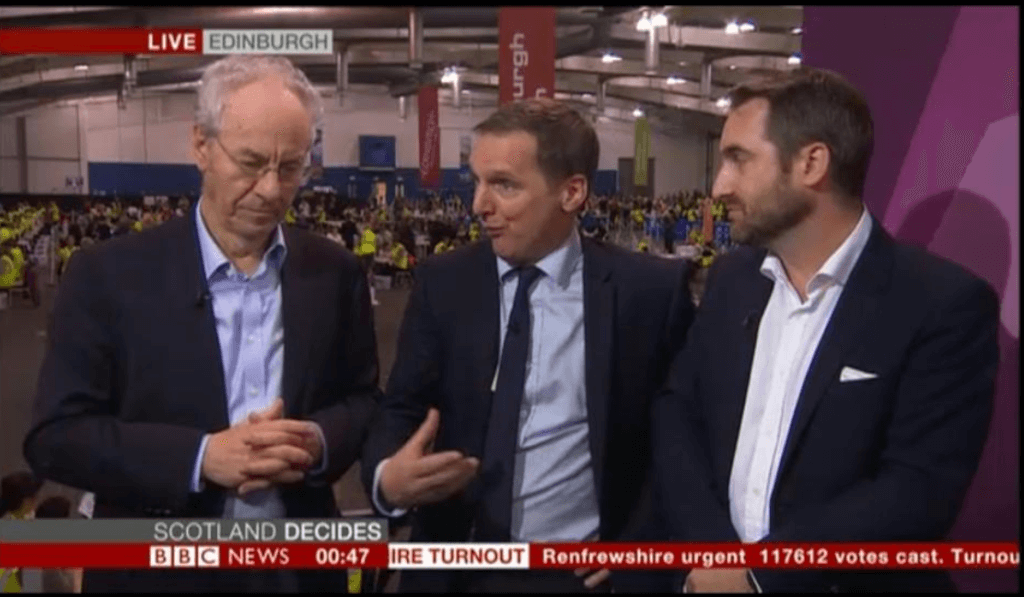 Damian Lyons Lowe (on the right of this picture) on BBC News for the Edinburgh Count at the 2014 Scottish Independence Referendum, with Peter Kellner (YouGov, left) and Mark Diffley (Ipsos Mori, centre)

Survation prides ourselves on our reputation for accuracy. As well as being the most accurate polling company in the 2014 Scottish Independence Referendum – a key event for Sterling – we enjoyed notable successes including at the UK General Election in July 2017.

Much derided ahead of the General Election , Survation was the only polling company in the industry to forecast the “hung parliament” that ensued, forecasted not once, but in three final published polls, and one private “MRP” model with Dr. Chris Hanretty of Royal Holloway University.

Survation develops and extends these different approaches to elections in other countries which should have broad investor interest; in particular, elections with impact on economic outlook, for currency, debt and equity markets. Survation polled and consulted the 2018 Italian General Election and the 2018 US mid-term elections, as well as topics such as experiences and lessons learned from the UK Brexit vote and our continuing coverage,

We can also advise on Survation’s newer financial services products, unrelated to political and international election coverage which have application outside of the political sphere.

Damian Lyons Lowe is a regular broadcast contributor during elections, on Bloomberg TV, CNBC, BBC and Sky News. Survation were selected to be ITV’s polling company for the 2017 General Election. For several years, Survation has provided advice and oversight to political programmes for Sky News, Channel 4 and ITV relating to Broadcast production and audience balance.

Contact Rushaa or Angelique at: media@survation.com for any media related enquiries, case study requests or queries.

For access to Survation’s Financial Services offering, please contact Angelique Vukmirovic, John Gibb or Harry Mason at +44 203 818 9646 or email the team at: survationfinancial@survation.com.

Survation is a Market Research Society (MRS) Company Partner and member of the British Polling Council. All MRS Company Partners and their employees agree to adhere to the MRS Code of Conduct and MRS Company Partner Quality Commitment.  As members of both organisations, Survation have a strong commitment to transparency and the integrity of our work.