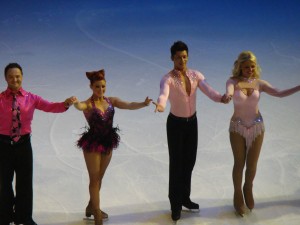 A close battle ahead (for second place!)

On Sunday night, we will be only two weeks into ITV’s “Dancing On Ice” series proper of a ten week schedule.

Unfortunately for the show, the level of competitive excitement it can leverage into viewing figures has been hobbled by the inclusion of contestant and former Eastender -Sam Attwater.
Being so much more accomplished and generally likeable than the other contestants has translated into popularity for Attwater in our survey to the point where it would seem that only injury could stop him from winning the show;

Dancing On Ice – January 23rd – January 27th  – Who Is Your Favourite (Remaining) Skater ?

(Unweighted data from 144 regular viewers of the show)


So in a field of 11 contestants, Sam is already more than 4x as popular as the next most popular contestant – Kerry Katona – who has limited popularity “breadth” – she is the second favourite of just 4.7% of respondents;

Who is your second favourite contestant?

The above data may translate to a final 3 that is as about as tight as the battle for “favourite judge” see below;

Who is your favourite Dancing On Ice judge?

Which presenter is your favourite?

Who might be leaving this week? – Contestants Decide The Evictee Between The Bottom 2


While there may be a lack of competitive excitement at the top of the the table this year, it is certainly tight at the bottom of the table with Welch/Vitty/Cork bottom of the first favourite questions. The numbers of respondents are rather small to judge the bottom accurately but it seems likely that those 3 and possibly Beharry are the prime contenders for bottom 2.

We would rule out Beharry to be eliminated this week as the elimination between the bottom 2 will be decided by the contestants and we don’t see these celebs eliminating a Victoria Cross carrying wounded war hero. On the above evidence, Cork seems the most likely to make bottom 2, followed by Vitty.

Who actually gets eliminated may come down to personal popularity between the evictees (or the desire for the (male) skater not to appear to be too “Andy Gray” and picking on a female if say, Denise Welch joins Dave or Dominic at the bottom).