Full Data tables for all questions are available here:

Survation is a member of The British Polling Council and abides by it’s rules.

Broadly briefed to the national press and broadcast media the preceding weekend, by November 9th it had become clear that that the Prime Minister would seek an opt-out from “ever closer union”, more powers to block EU laws, reduce “red tape” regulation for British businesses and restrict benefits for new EU migrants.

With these specific demands floated and discussed widely, Survation, on behalf of Leave.EU, conducted online polling with fieldwork from November 9th to 11th covering:

Headline referendum voting intentions from the poll of 2007 adults over the age of 18 including Northern Ireland (excluding non-voters) are below. Comparisons are to Survation’s September 27th polling for Huffington Post.

Remain a member of the European Union – 39% 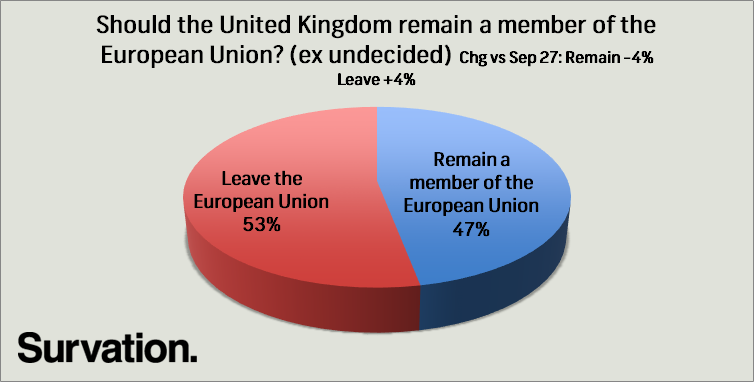 Despite being just one poll, Polling companies whilst showing a tightening picture have not shown such high figures for leaving the European Union generally since November 2014.

While YouGov and Survation have both shown small polling leads for leave over remain in September this year – this came on the heels of a period of broad media coverage of this summer’s migrant crisis in Europe. So these latest leave/remain figures will not provide comfort for the Prime Minister.

While believing his demands will be “difficult” for other member states to agree to, they might prove not be enough for a significant part of the British public, who are potentially looking for a more extensive package of reforms

To test the relative attractiveness of David Cameron’s demands to the British electorate, we asked respondents to rank the 5 substantive proposals for reform that he laid out, alongside 3 other popular demands from our previous polling – full UK parliamentary sovereignty over the EU, ending free movement of people into the UK and lowering of the financial cost of EU membership. In terms of Cameron’s demands, members of the public rated a proposed limit of access to benefits to EU migrants unless resident for 5 years (not the 4 year figure asked for in the end) as their top choice for what they would like to see renegotiated.

This demand really reflects two popular policies rolled in one – both cutting the UK welfare bill and reducing an assumed “pull factor” of economic migration to the UK.

None of David Cameron’s other demands made the public’s top four however, with the other three top slots being filled by desire for full sovereignty restoration, border control and reduced financial contributions to the EU.

In effect, this leaves almost half of all voters without their top demand for reform present on the negotiating table by David Cameron.

This leaves Cameron very heavily dependent on securing limits to welfare benefits in order to present his renegotiation as a popular success.

Limiting migrants’ access to benefits was ranked as the top demand by 22% of voters and 27% of undecided voters, showing its potential impact in swinging the referendum in his favour if the Prime Minister is able to secure this demand.

However, this has also been widely considered the most difficult demand to get past other EU leaders, thus representing a considerable challenge for the PM.

Are Other European Leaders Listening?

Scepticism of the Prime Minister’s ability to secure a “good deal” was apparent in our polling – just 22% of the public feel that Cameron is “likely to achieve a good deal”.

One potential reason for this is a perceived lack of British influence in Europe:

To find out more about Survation’s services, conducting a telephone or online poll for your research needs, please visit our services page.