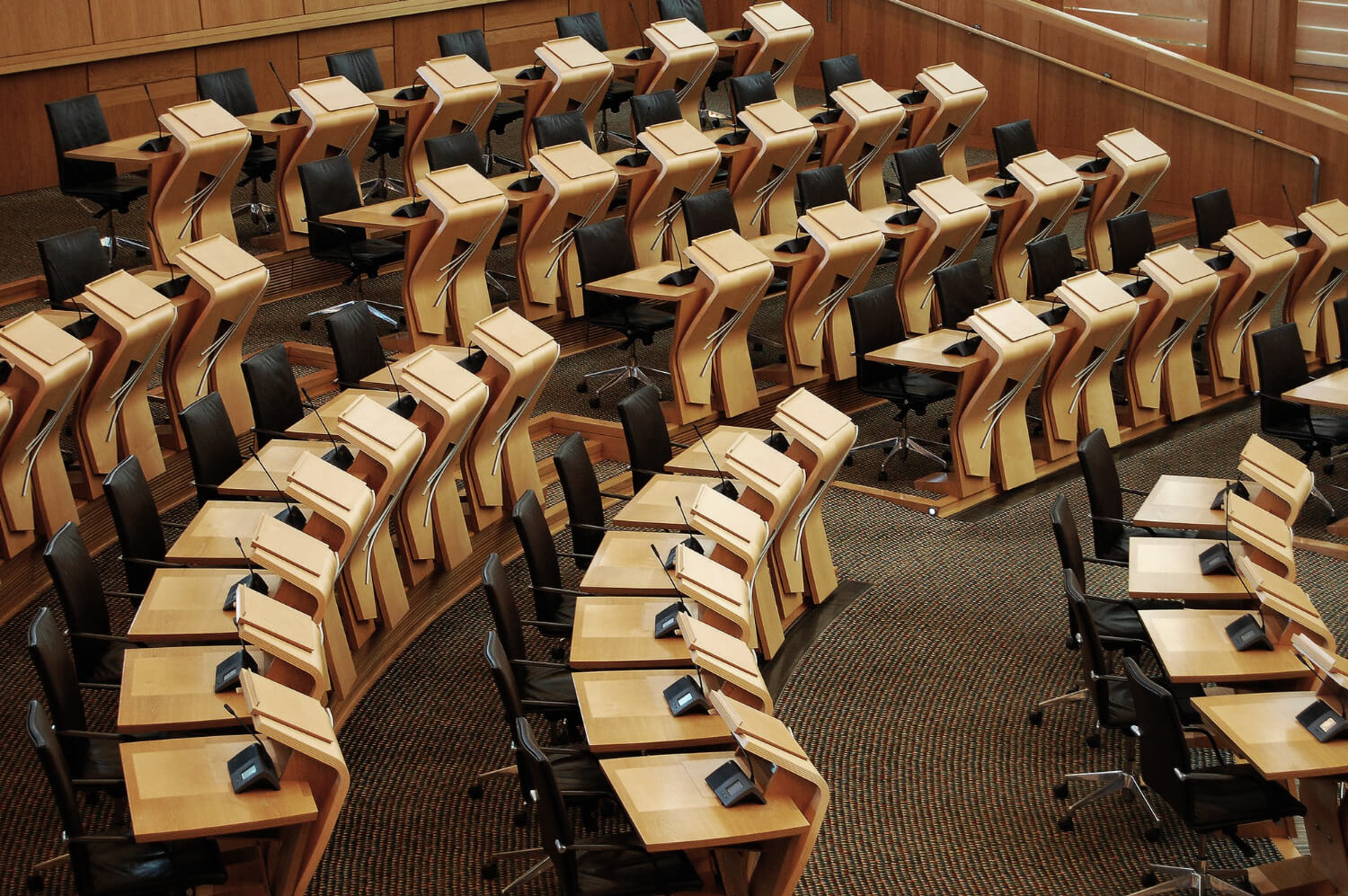 New polling conducted on behalf of True North finds support for Scottish Independence sits at 46%. This is just +1% on the 2014 Referendum result and represents a slight decrease (-1%) from the previous poll conducted for True North in August 2022. The latest result comes from a survey of 1002 adults aged 16+ living in Scotland, with fieldwork completed between 10th – 12th January 2023. Notably, fieldwork concluded before the UK Government blocked the assent of the Scottish Parliament’s Gender Recognition Reform Bill, and the effect this constitutional strain might have on independence voting intention is currently unclear. 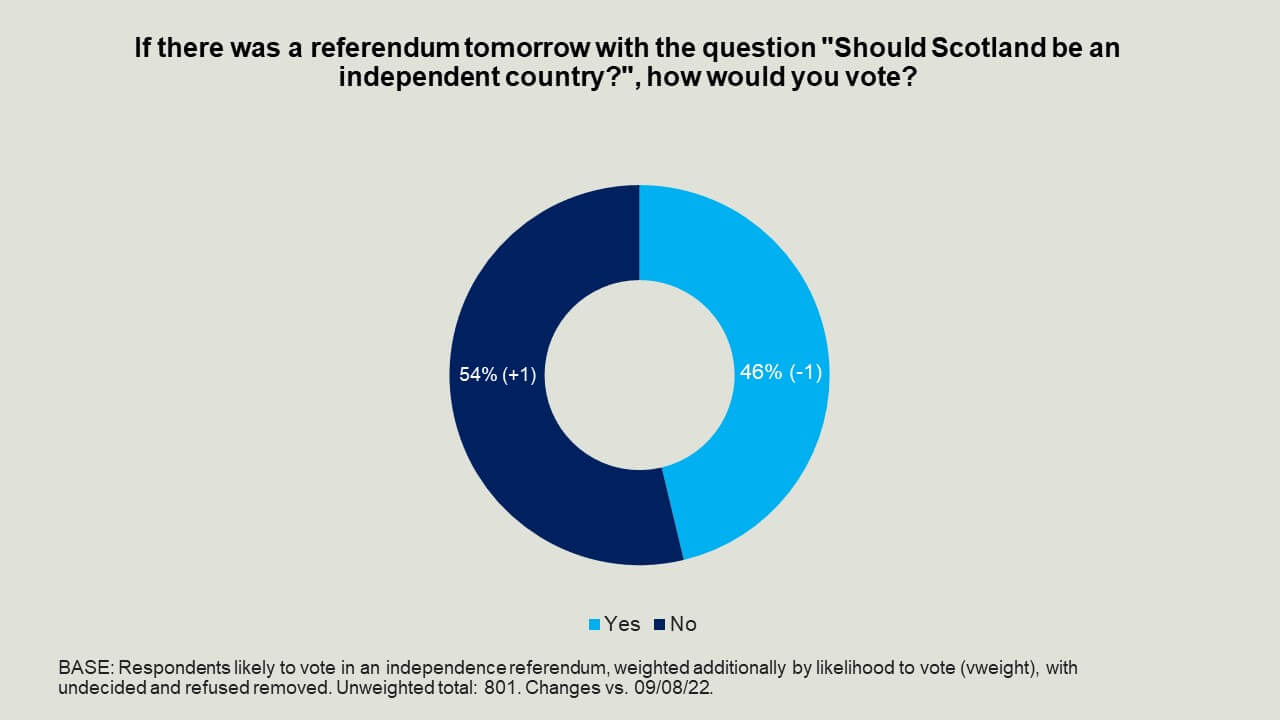 Our Westminster voting intention question sees the SNP on 43%, with Labour in second on 29%, and the Conservatives third on 18%. Whilst the SNP have a substantial lead, First Minister Nicola Sturgeon is likely to be dissatisfied. Her party won 45% of the vote in 2019, +2% more than indicated in this poll. If the SNP hope to fight the next Westminster election as a de-facto referendum, 43% of the vote share coupled with just 46% expressing an intention to vote Yes will be insufficient. It seems the SNP need to convince more voters of the case for independence. 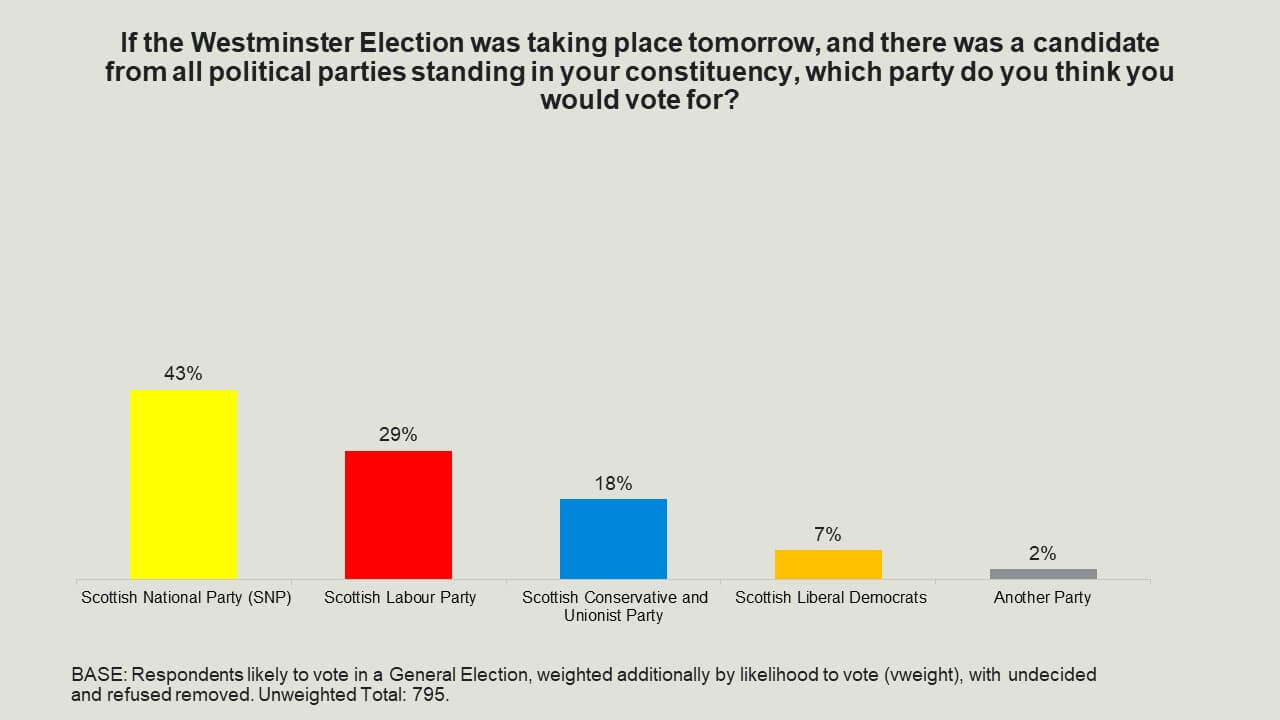 Support for the SNP is stronger in Holyrood, with the party sitting on 46% of the constituency vote. Labour is the leading unionist party with 27%, sweeping up 20% of 2021 Liberal Democrat voters and 9% of 2021 Conservative voters. 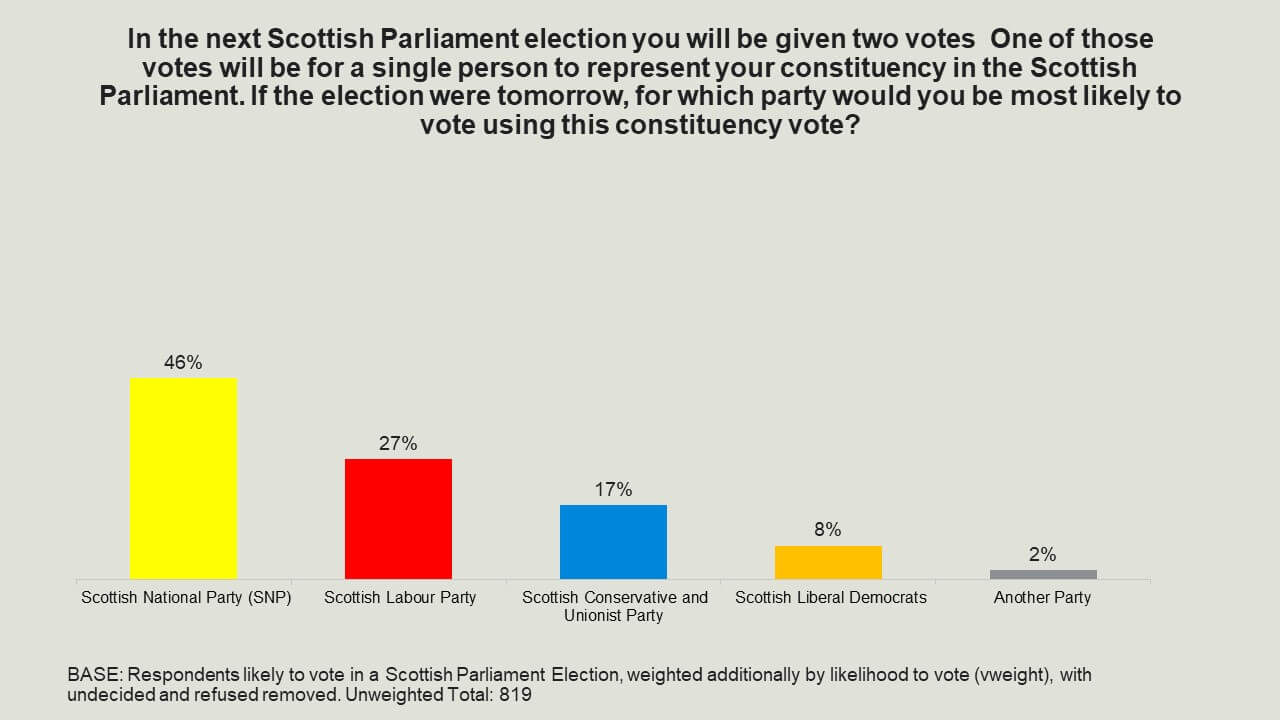 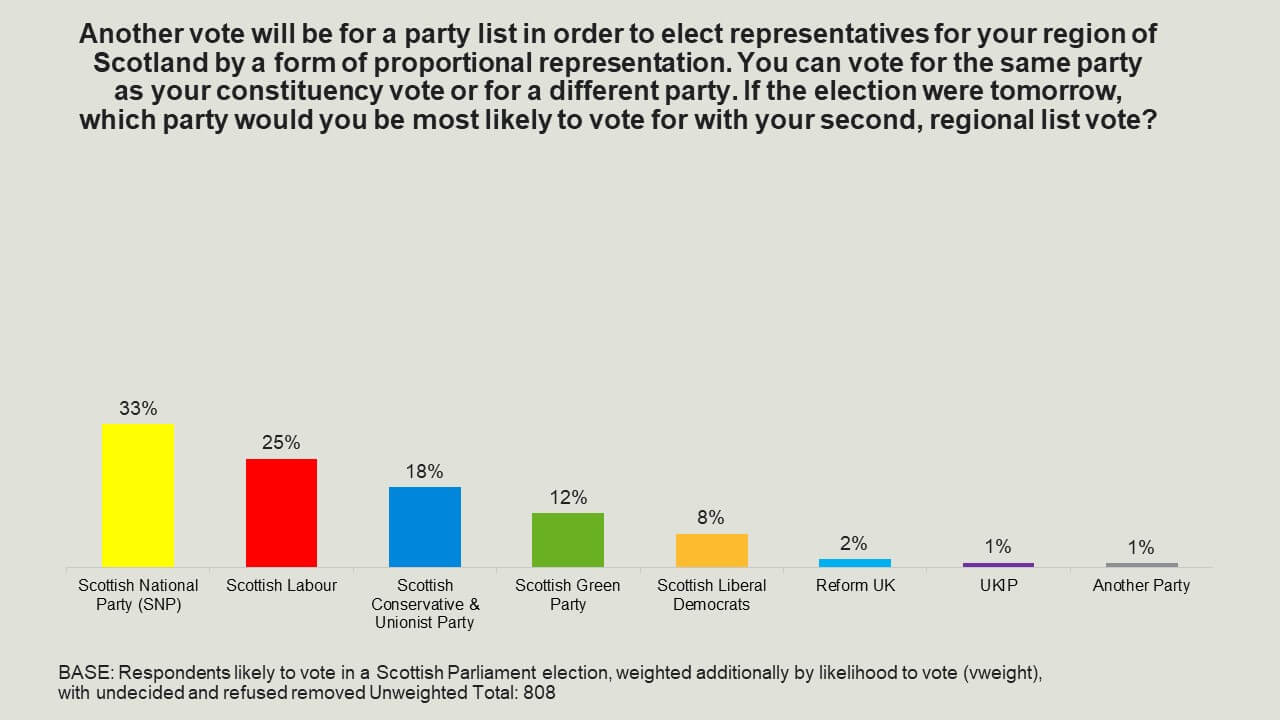 Sturgeon will be disappointed not to see improvement on the 48% of the constituency vote and 40% of the list vote the SNP won in 2021. Garnering greater support for the party may, however, prove difficult as the cost of living crisis deepens. The public is clearly feeling the squeeze of inflation on living standards, and NET satisfaction with the way Scotland’s economy is run is -21% while 62% think economic performance has worsened over the past year. Nor do the public expect any immediate improvement, with 55% predicting 2023 will not be a good year for Scotland’s economy. Just 5% think the cost of living crisis will improve in 2023, with 71% expecting it to worsen. 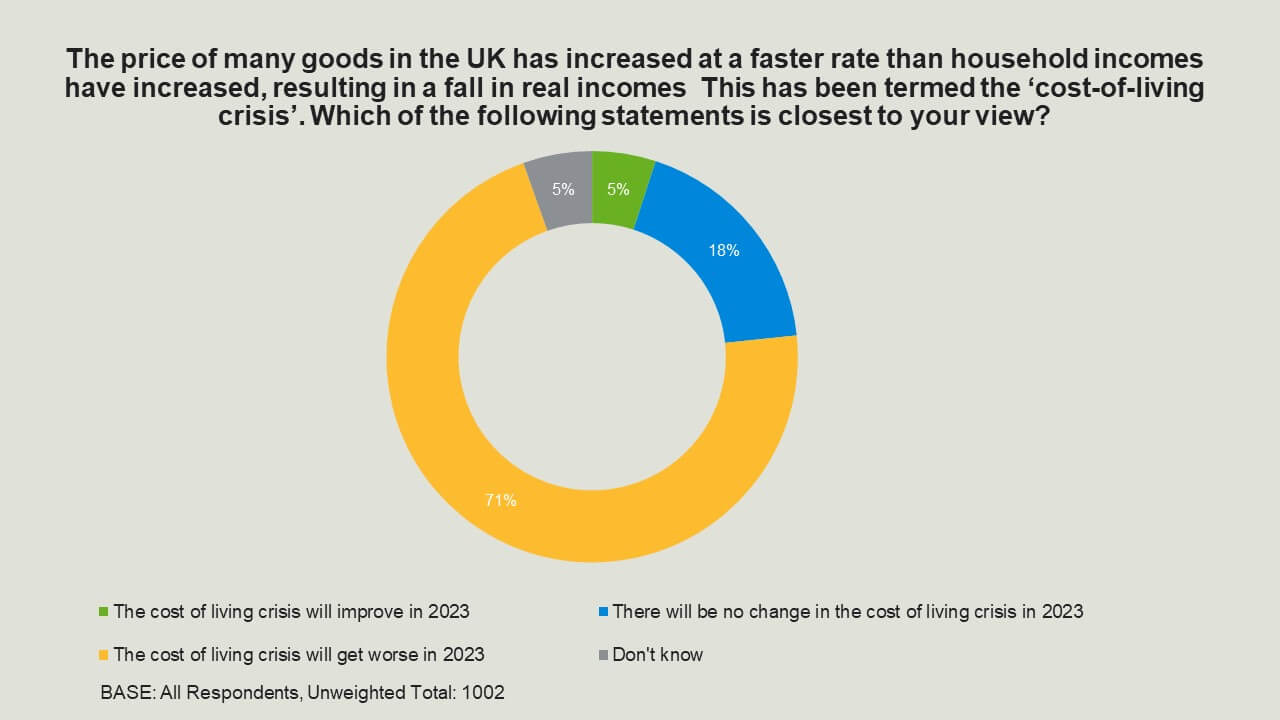 Only 41% of Scots believe they receive better public services than the rest of the UK as a result of their higher relative income tax rate. A majority (62%) think standards within Scotland’s NHS have decreased over the past year, and NET satisfaction with the service is -18%. This discontent extends to education, where 41% think standards have decreased and NET satisfaction is -8%. 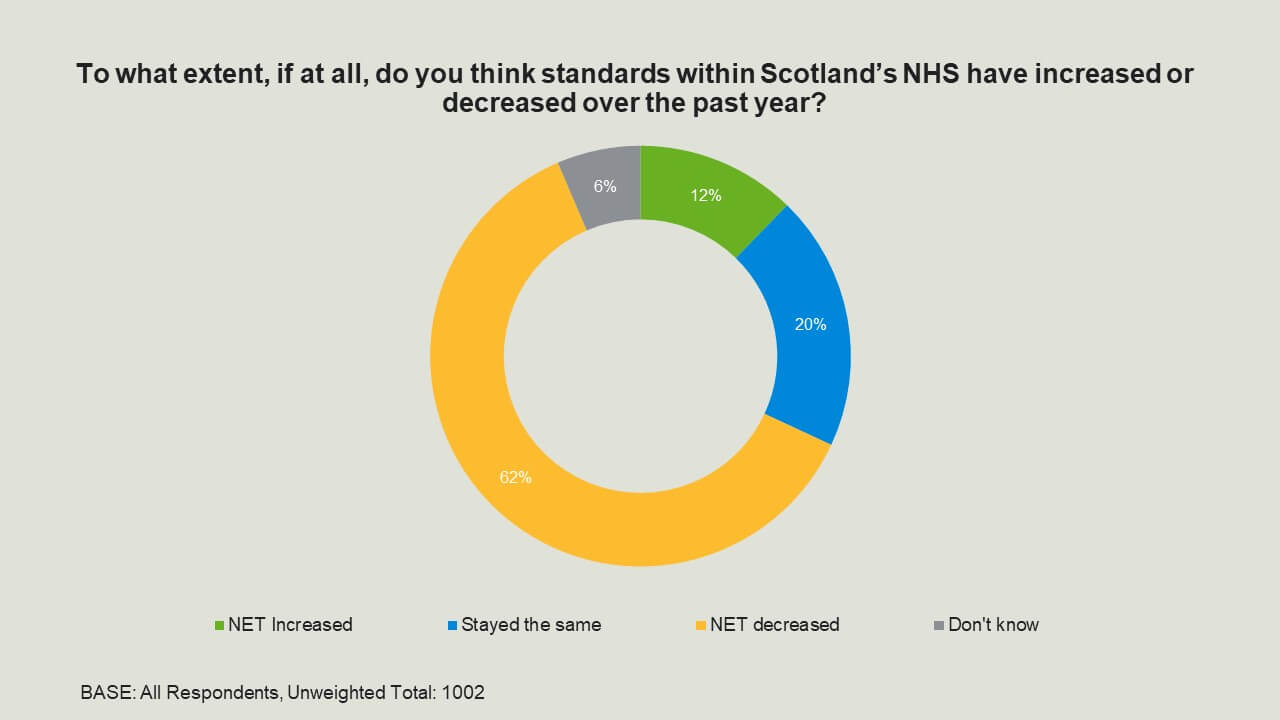 These findings are problematic for the SNP. Not only are voters seemingly unconvinced by the case for independence, but they are also dissatisfied with the performance of the Scottish Government on the economy and public services. These two problems are related. The First Minister will likely find it easier to sway voters towards independence if she can demonstrate the SNP’s superior ability to govern when compared to Westminster. The SNP are hoping to fight the next Westminster election as a de-facto referendum, yet without improvements in public satisfaction on the economy and public services, the party may not receive a sufficient expression of consent for independence.

The tables for the Scotland poll are available here. Survation conducted an online poll of 1,002 adults aged 16+ in Scotland on behalf of True North. Fieldwork was conducted between 10th January – 12th January 2023.

The tables for the August 2022 poll are available here. Survation conducted an online poll of 1,002 adults aged 16+  in Scotland on behalf of True North. Fieldwork was conducted between  5th – 9th August 2022.