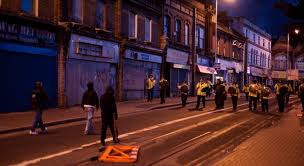 Survation conducted a survey of 520 members of our Consumer Panel between August 10th and August 11th in the aftermath of the UK-wide riots in the UK. Full data tables can be viewed in pdf form  here; If you would like a copy of the tables in excel please email us at researchteam@survation.com

The table below shows the public’s perception of the performance of each of the key Public figures and how they handled the crisis. Only Tim Godwin – Acting Commissioner for the Metropolitan Police emerged in an almost positive light with the public disappointed with the way the other key figures acted. Where does the blame lie?

Of the people surveyed, the majority (62%) believe it is the people who took part in the looting and rioting that are to blame.  Just 13% blame “gang culture”  whilst just 9% believe the government are most at fault. A greater proportion of men than women place the blame with those who took part (67% men versus 57% women). Women (17%) are more likely to see gang culture as the root of the problem than men (just 9%). Although over 60% of people of all age categories lay the blame with the people who took part, 20% of older people lay blame with gang culture, but in the 18-24 category, the Government came out as the second biggest cause at 20%

Punishment
The majority of people surveyed (84%) believed that Prison should be the suitable punishment for anyone involved in rioting and looting. Although 75% also agreed that Community service could be a suitable punishment. 67% think that a fine would be acceptable. CCTV Footage
80% would give up someone they know to police if they recognised them on CCTV footage.
90% of over 60s would do so, the number falling to 71% of those aged 18-24.
96% of conservative voters would do so, versus a considerably lower 78% of liberal democrat voters.

Your Family
36% have been worried about their own or their family’s personal safety over the past week; 43% of women versus 30% of men. More Conservative voters have been fretting than Liberal democrat and Labour voters. This figure rose to 69.7% of responders when looking at the Greater London area only.

Benefits
63% believe the benefit payments of convicted rioters should be stopped. 85% of conservative voters would support this, compared with 51% of labour voters and 55% of liberal democrat voters.

Parents
72% believe the parents of convicted rioters or looters aged 16 and under should also be punished. The majority of these people (58%) believe a fine would be appropriate, whilst just 14% of them think a jail term would be a suitable punishment for the parents. Men are more likely than women to state that parents should not be punished for the actions of their children aged 16 and under. 22% of men say no to this, versus 11% of women. 28% of people aged 18-24 say no to this notion, compared with just 8% of the over 60s. Labour voters are the most opposed to the punishment of parents.

To join the Survation consumer panel and be part of the national conversation click here;