Councillors in the United Kingdom are elected for four year terms and are vital in the delivery of local services. Besides their importance in local government, councillors also play a crucial role at the national political level. Councillors help to mobilise members during election campaigns and are key to party cohesion.

When asked to reflect on the local performance of their party in 2022, NET satisfaction amongst councillors was 50%. Liberal Democrats reported the greatest satisfaction at +92%, with Labour  in second at +73%. For Conservative councillors, however, this figure fell to +21%. 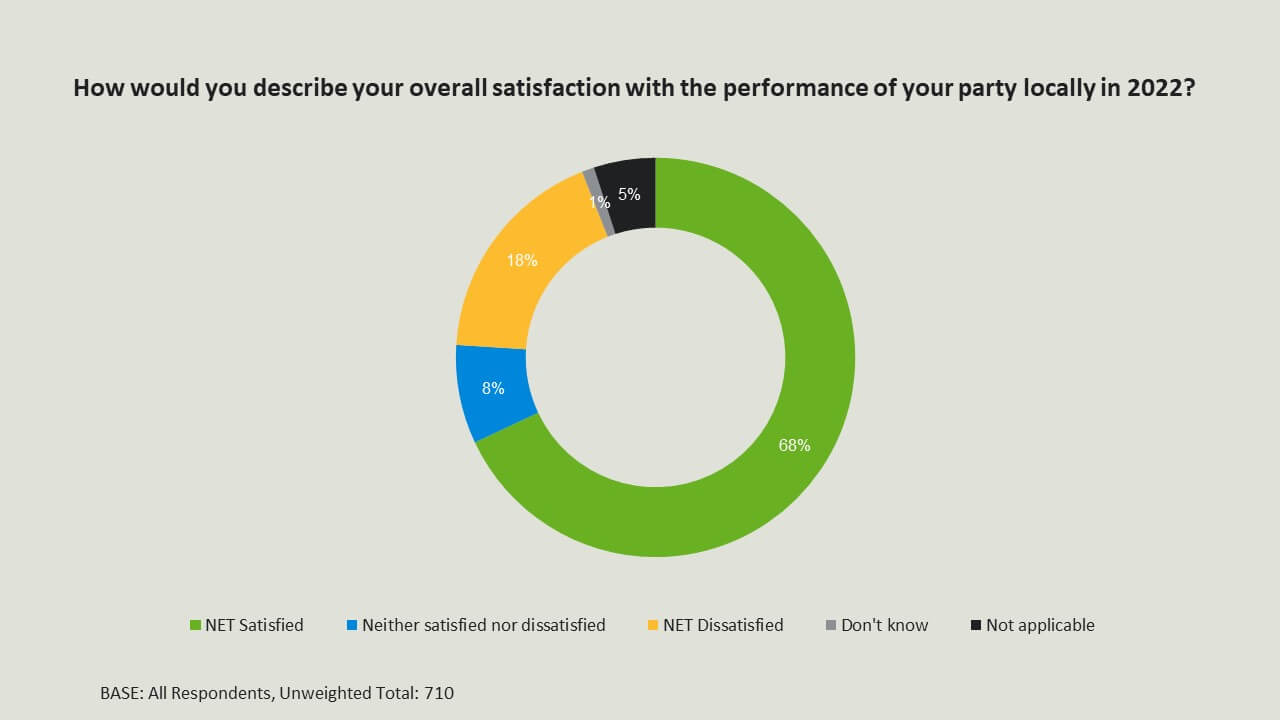 Conservatives dissatisfaction with their party’s performance was more pronounced at the national level. NET satisfaction with national party performance was -53% for Conservative councillors, lagging well behind Labour (+65%) and Liberal Democrat (+56%) councillors. This dissatisfaction is understandable, given the party currently trails Labour by 20 points in voting intention polls. Moreover, 2022 saw the resignations of both Boris Johnson and Liz Truss, meaning the Conservatives finished the year with a leader the membership rejected in their summer leadership election – a motivating force behind the recent creation of the Conservative Democratic Organisation, which seeks to establish greater membership control of the parliamentary party.

A majority reported being ideologically aligned with their party leader. Conservative councillors were most likely to report not being aligned, with 36% expressing this view compared to 27% of Labour representatives. This misalignment is predictable, as Sunak did not win election from his members. Sunak will be hoping his five pledges, set out at the beginning of the new year, are agreeable among councillors and the wider membership, but the pledges only attempt to introduce quantifiable performance indicators – they do not outline a vision for the country.

This lack of a vision perhaps contributes to only 10% of councillors predicting a Conservative majority in the next Westminster General Election, with 47% viewing a Labour majority as the most likely outcome and 42% anticipating no overall majority for either party.

Labour councillors expressed faith in their party’s prospects, with 79% seeing a Labour majority as the most probable outcome. Not a single Labour councillor thought a Conservative majority was most likely. An optimistic party base is likely to be a motivated one, but the Labour leadership has been apprehensive about its +20 lead in the polls. Where Starmer is heeding caution, Sunak will need to generate belief amongst his base that the Labour lead is not insurmountable. With only 25% of Conservative councillors currently viewing a Conservative majority as the most likely outcome, convincing activists the next election is winnable is likely to be an uphill battle.

The tables for the councillors poll are available here. Survation conducted online interviews of 710 elected councillors in the UK. Fieldwork was conducted between 23rd December 2022 – 16th January 2023.