New Survation polling of British Jews on behalf of the Jewish Chronicle suggests that the Labour Party, and Jeremy Corbyn in particular, has a lot of work to do to regain the trust of the UK Jewish community.

The poll, conducted using Survation’s panel of the GB Jewish population found that 86% of British Jews polled believe that Jeremy Corbyn is anti-Semitic compared to 8% who said he is not and 6% who did not know. The same proportion of respondents believed that there were high levels of anti-Semitism among the Labour Party’s members and elected representatives (4 and 5 on a 1-5 scale where 1 meant low-levels and 5 high-levels).

This represents an increase from May 2017 when Survation asked a similar question (which did not include a ‘don’t know’ option); a year ago, 69% believed that there were high levels of anti-Semitism among the Labour Party’s members and elected representatives.

Survation also recently asked a nationally representative sample of the general British public the same two questions. Amongst the general population 39% believed Jeremy Corbyn is anti-Semitic, 28% that he was not and 33% said they didn’t know. 59% of 2017 Conservative voters, 21% of Labour voters and 62% of Liberal Democrat voters believed that Jeremy Corbyn is anti-Semitic.

43% of all UK respondents said there were high levels of anti-Semitism in the Labour Party. This included 63% of Conservative voters, 28% of Labour voters and 64% of Liberal Democrat voters. 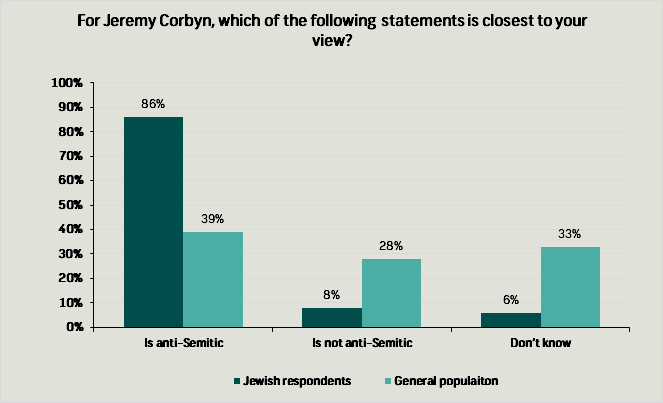 Survation also asked both Jewish respondents and the general population the same questions regarding anti-Semitism about the other two main parties and UKIP. 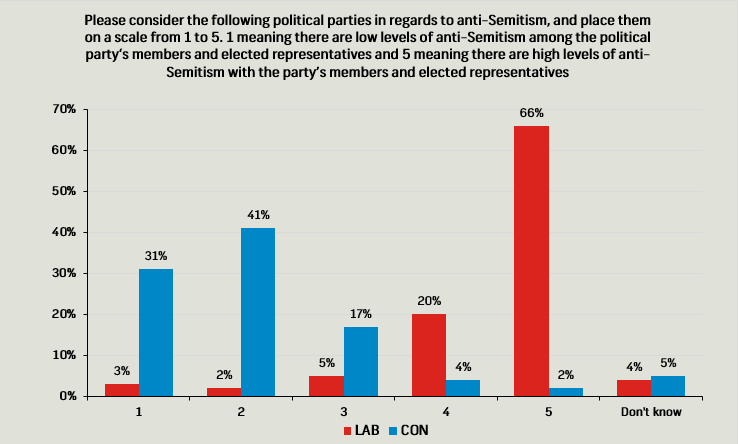 Amongst the general population, 19% said there were high levels of anti-Semitism in the Conservative Party, 13% in the Liberal Democrats and 35% in UKIP. Only 12% said Theresa May was anti-Semitic, 10% for Vince Cable and 13% for Gerard Batten. The majority for the last two leaders said ‘don’t know’ (52% and 69%)

The poll of the Jewish Community was conducted over parliamentary recess, during which time the debate about the Labour Party’s decision to adopt a modified version of the IHRA’s definition of anti-Semitism dominated much of the political news agenda. The national representative poll of GB adults was conducted over two days during this period.* Both sets of fieldwork were completed before Labour’s NEC voted to adopt the definition last week.

The Jewish community’s concerns about Jeremy Corbyn cannot be characterised simply as a reaction to past allegations that have come to light over the summer.

During Corbyn’s first leadership bid in August 2015, Survation conducted a poll of 1,011 members of our Jewish panel on behalf of the Jewish Chronicle and found that at that time 67% of British Jews polled said that they were concerned about Jeremy Corbyn becoming leader of the Labour Party, including 61% of those who had voted Labour in 2015.

Survation polled 710 residents aged 18+ in  GB who identify as Jewish. This survey was generally conducted via telephone; however additional respondents were invited to take part in the survey online. Fieldwork was between 12th August and 4th September 2018.

*Survation polled 1017 residents aged 18+ in the UK online. Fieldwork was between 31st August and 1st September 2018.

Survation is a member of the British Polling Council and abides by its rules. BPC Statement: All polls are subject to a wide range of potential sources of error.