What are the political implications of a winter of strike action?

Would a “Winter of discontent” be a political headache for Labour or the Government? Jack Peacock reviews the polling for clues:

This December, Britain will lose 1 million working days to strike action over pay disputes – the most in any single month since July 1989.  Public sector workers who have announced strike action include NHS and ambulance staff, railway workers, civil servants, royal mail workers, firefighters, and university staff.

These workers are demanding pay rises that reflect the increased cost of living. The UK’s Consumer Price Index, which calculates the average change in prices for around 700 items from the previous year, shows the inflation rate is currently 11.1%, and the latest OBR forecast estimates a 7% decline in household incomes over the next two years. Although the Government has already negotiated pay rises across the public sector at an average of 5%, this still constitutes a 6% cut in real terms.

The economic outlook for many in Britain is dire. In response to a nationally representative survey conducted on behalf of Unite the Union in August, just 40% of participants believed they will be able to pay their household bills comfortably this year. A majority will either experience some difficulty (44%) or not be able to pay (10%). 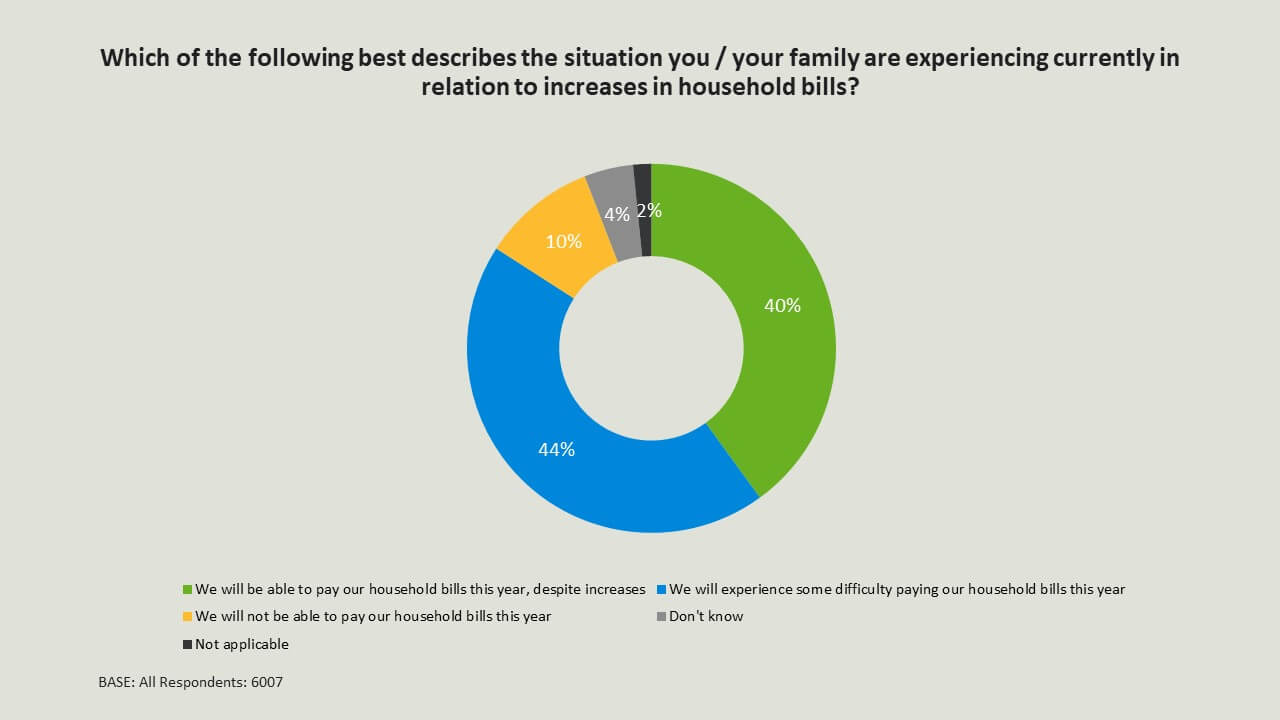 This research was conducted prior to the launch of the Energy Bills Support Scheme, which we may expect led to some increase in optimism. Many respondents will, however, lose access to this support in April when the scheme becomes targeted to support the elderley and most economically precarious.

The public’s incomes are not keeping pace with the rising cost of living, and by August 70% of people reported their incomes had ‘not increased at all’ in line with inflation. 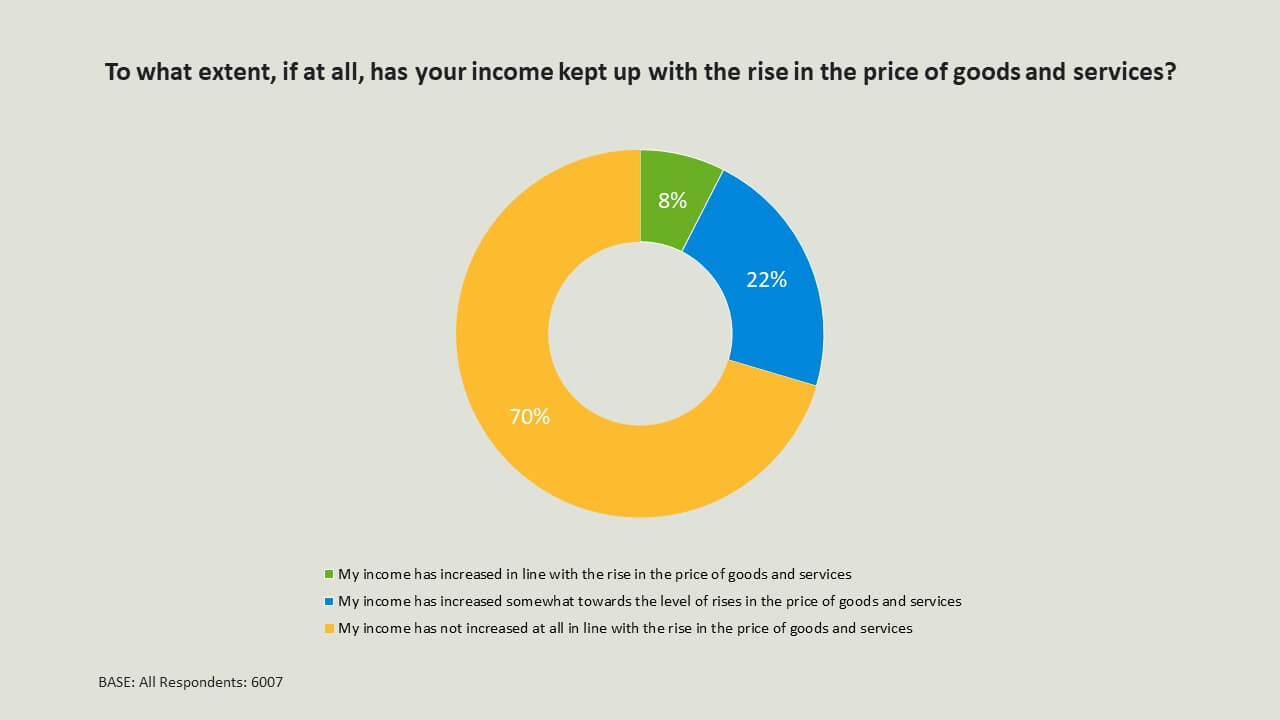 The politics of the Government’s response to declining pay are unclear. The group who stated their income has not at all increased in line with inflation includes 75% of those who voted Conservative in 2019. The proportion of 2019 Conservative voters whose pay has not increased at all in line with inflation is higher than the proportion who voted Labour (69%), and the trend is the same for voting intention at the next general election. Tackling stagnant wages and rising inflation is therefore both an economic and political necessity for the Government.

Voters are united on the importance of issues surrounding pay, and this may be contributing towards support for increasing public sector workers’ pay in line with inflation. Research completed for the Communication Workers Union (CWU) in August showed 65% net agreement with the general principle that ‘pay should rise in line with the cost of living’. Despite a 19% difference in net agreement between 2019 Conservative voters (61%) and 2019 Labour voters (80%), there was still majority support amongst both sets of voters.

In polling for Unite, 73% stated they believed NHS and care workers should receive pay rises that keep up with increases in the cost of living. 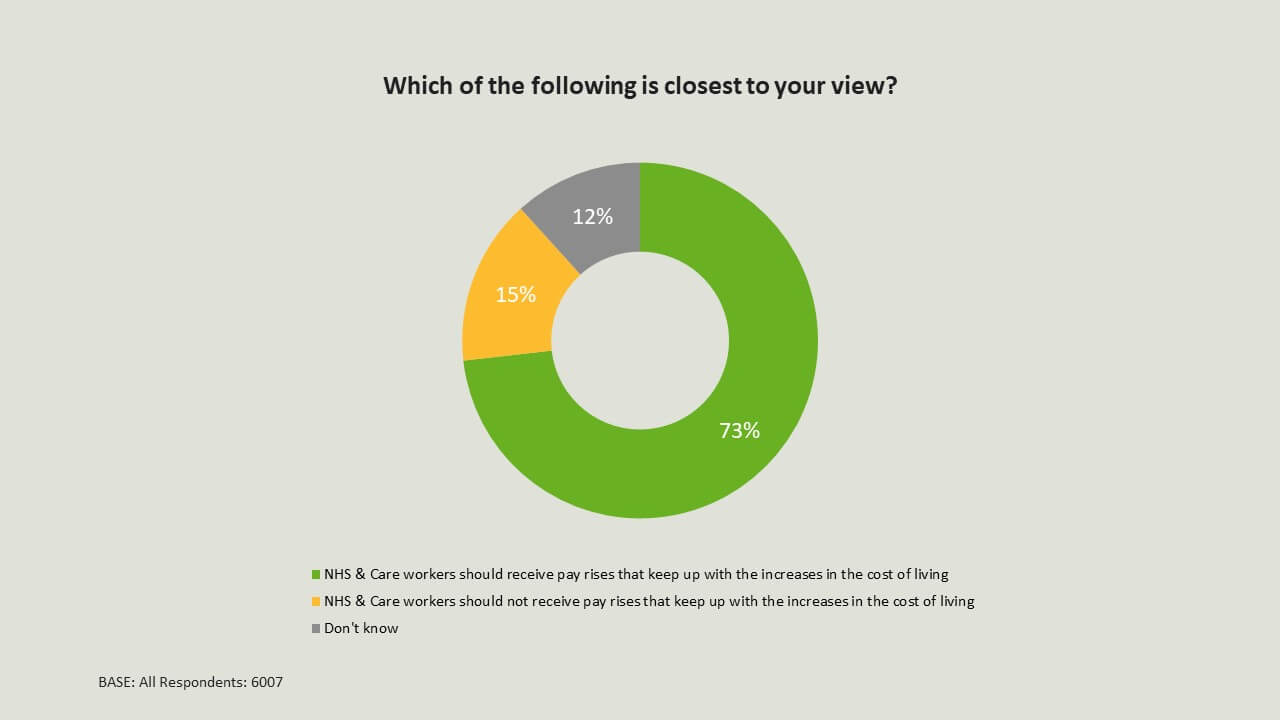 When asked in June whether British Airways cabin staff should have their 10% pay cut from the pandemic restored, 73% supported the measure. While there was robust overall support, support was strongest amongst older respondents (80% for 55-64 and 80% for 65+), and weakest for younger participants (70% for 18-24 and 25-34). 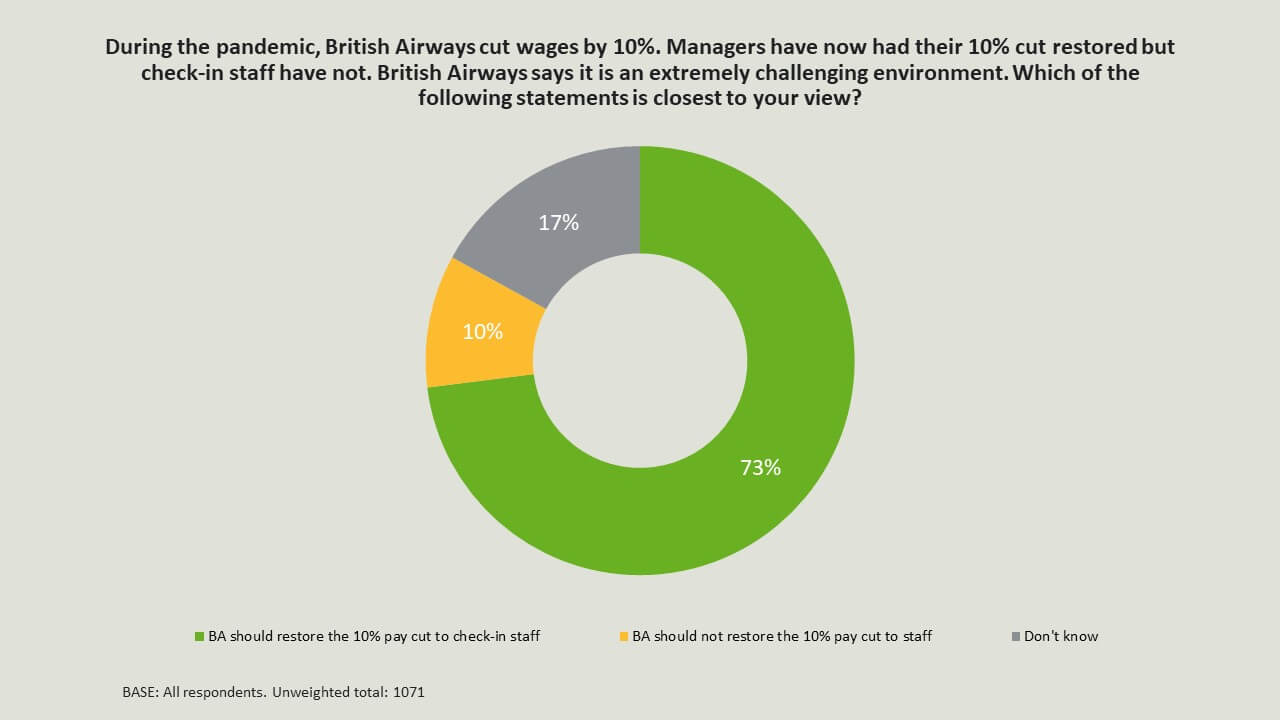 Moving from the principle that pay should rise in line with the cost of living to the question of whether workers whose employers fail to deliver this are justified in striking, however, reduces levels of agreement somewhat. Asking participants whether strike action by British Airways check-in staff over the same issue was justified saw 22% respond they were unjustified and 59% say they were justified. Interestingly, previous voting records provided little insight into whether or not respondents thought the strike was justified. There was little variation between Remain (63% justified) and Leave (66% justified) voters, and 63% of both 2019 Conservative and 2019 Labour voters thought strike action was justified. 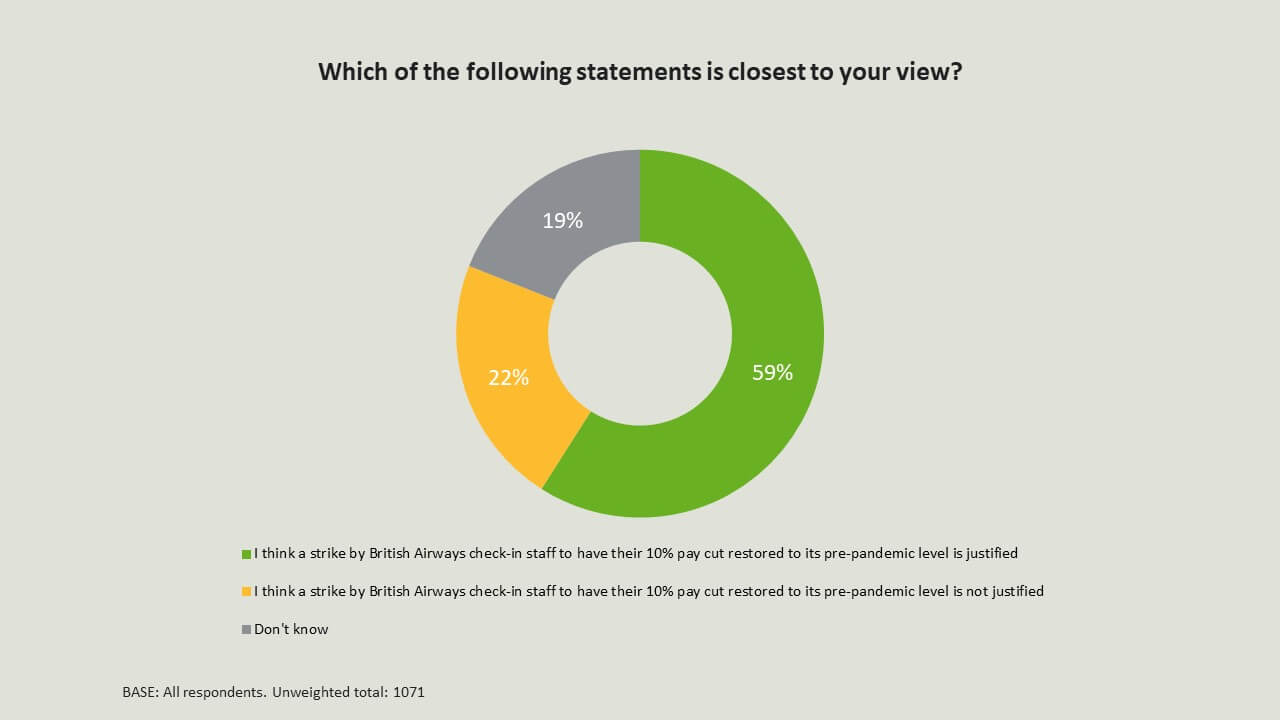 Similarly, polling for CWU showed that 53% thought the August Royal Mail strikes were justified, despite 65% net agreement with the general principle that workers’ pay should rise in line with inflation. Older voters were less likely to believe the strikes were justified, but more noticeable is the 35% gap between 2019 Labour voters (80% justified) and 2019 Conservative voters (45% justified). 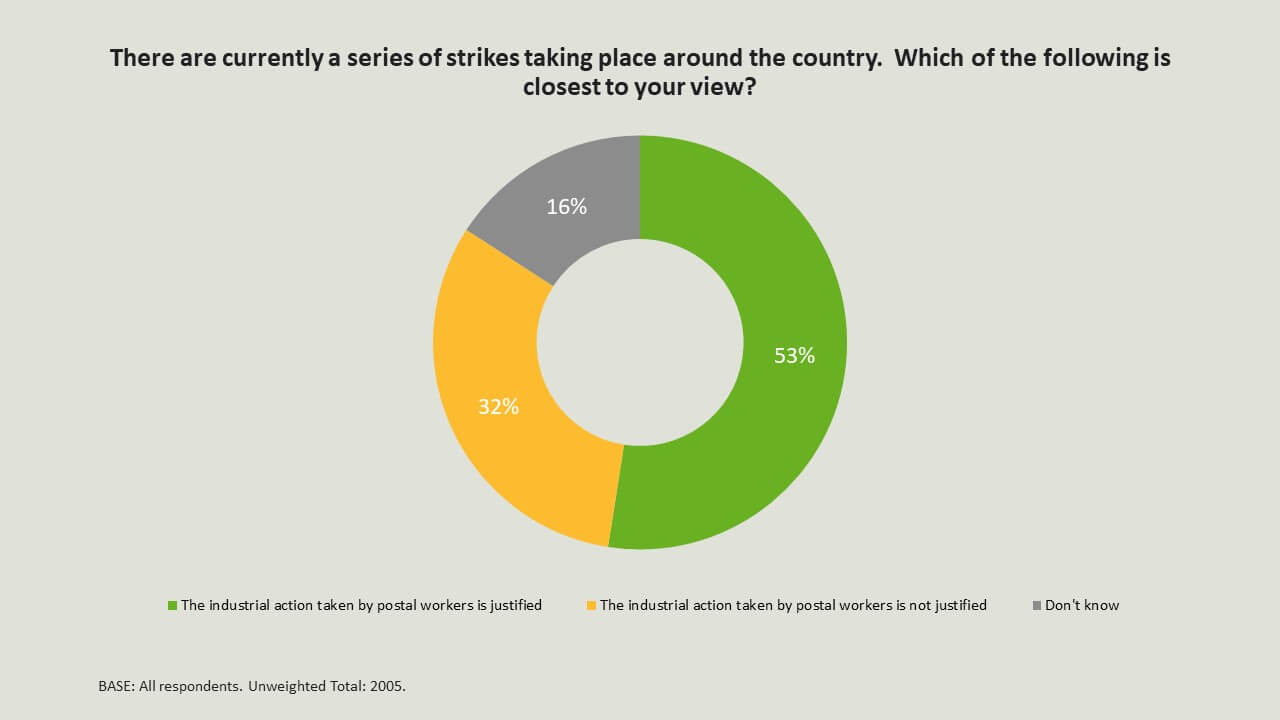 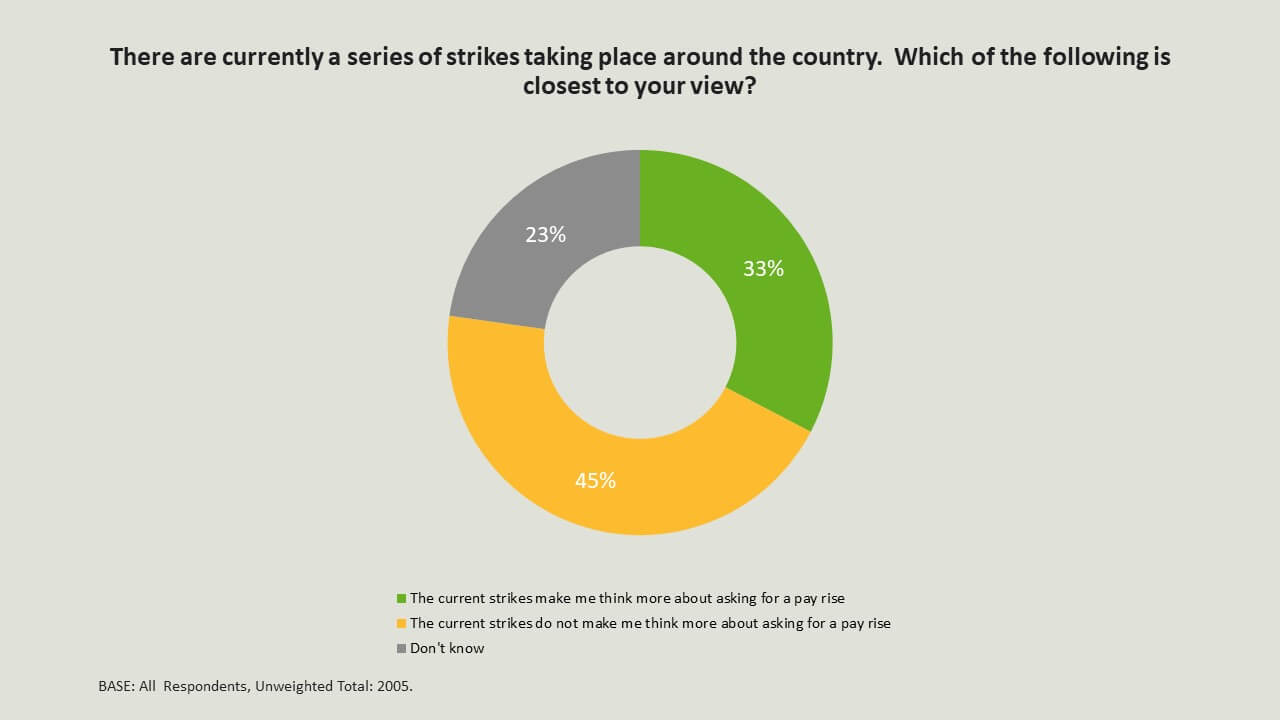 There is clearly a majority-held principle that workers should receive pay rises reflecting increases in the cost of living. When workers do not receive this and choose to strike, however, we see that party preferences might dictate levels of support. Nonetheless, a majority still view strikes as justified under such circumstances.

This is problematic for the Government, who will be hoping the planned strikes generate resentment towards the unions. The first issue with this approach is that they cannot bank on attitudes shifting in such a way. In August, 36% of survey respondents thought the Government was most responsible for the railway workers strike action compared to 28% for the unions, 19% for employers, and just 10% for the workers. While 50% of 2019 Conservative voters thought the unions were most at fault, overall the blame was attributed to the Government – including by 21% of those who voted the party into power. 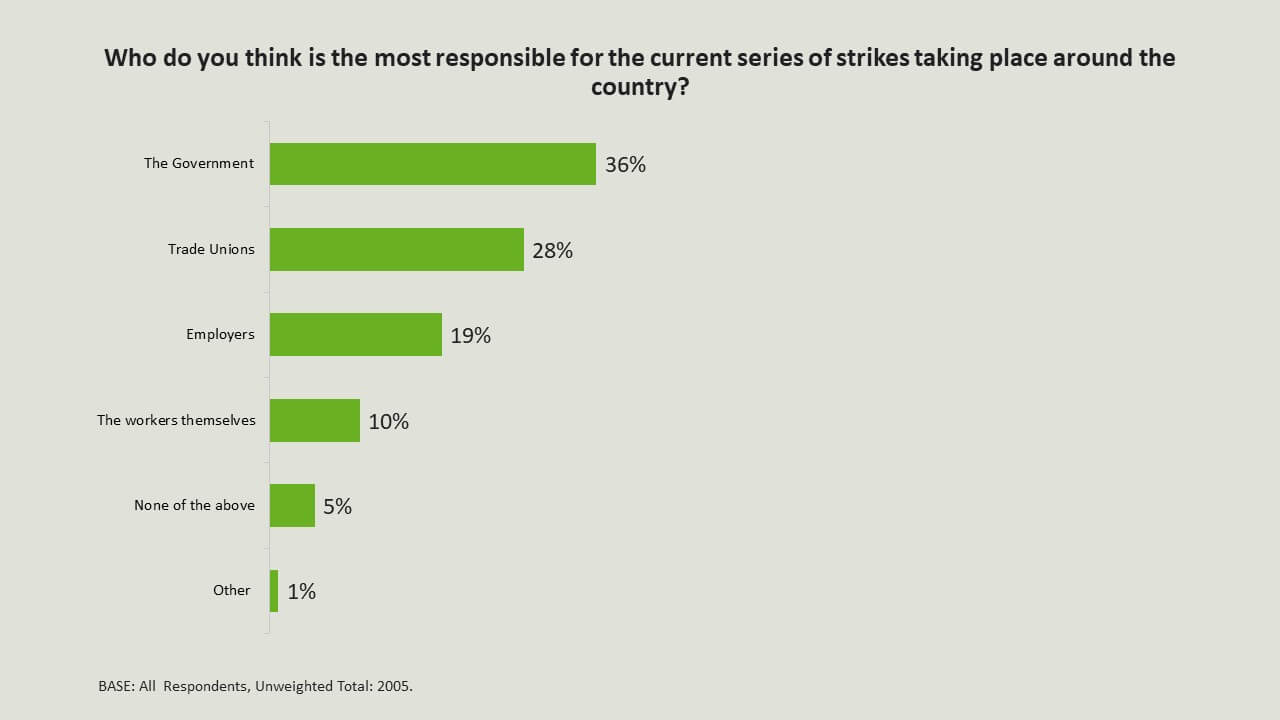 More challenging for Sunak is that his Government may not have the political capital to wait for potential contempt towards the unions to foster. Our latest voting intention poll showed a 23 point lead for Labour over the Conservatives, and while Sunak’s net favourability is stronger than both his own party’s and the Government’s, he cannot afford for the party to slide any further in the polls while he gambles that public opinion will swing in his favour.

The Prime Minister is reportedly considering extending the proposed minimum service levels bill to cover key workers, including NHS staff, teachers, and firefighters. Introduced in October in response to rail strikes, the bill would require railway workers maintain a minimum level of service during strikes. Employees who are required to work but choose to strike would not be protected by existing laws on unfair dismissals.

The difficulty with extending this legislation is that taking strike action is already a difficult process which requires clearing several hurdles; there is little room for further restrictions without making strikes effectively illegal. The European Court of Human Rights  protects workers’ rights to organise and bargain collectively, and recognises strike action as a last resort in the bargaining process.

The fact NHS workers are prepared to strike while aware of the potential consequences is testament to the severity of their declining living standards. A majority believe workers should receive pay rises reflecting inflation, and strike action appears to be their last available means of achieving this. If the Prime Minister wants to push for further restrictions on strikes, he risks galvanising greater support for an already popular cause as well as a potential legal challenge.

The tables for the June Unite research are available here. Survation conducted an online poll of 1,071 adults living in the UK. Fieldwork was conducted on 27th of June.

The tables for the CWU research are available here. Survation conducted an online poll of 2,005 adults in the UK. Fieldwork was conducted between 24th and 25th August 2022.

The tables for the August Unite research are available here. Survation conducted an MRP analysis of 6,007 adults in the UK on issues related to the cost of living. Fieldwork was conducted between 24th and 30th of August.

The tables for our latest voting intention poll are available here. Survation conducted an online poll of 2,028 adults in the UK. Fieldwork was conducted 26th-27th October.