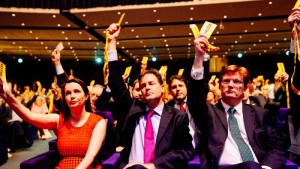 In contrast to former Conservative party Deputy Chairman Lord Ashcroft’s polling earlier in the week, Survation is forecasting a Liberal Democrat hold in the Eastleigh by-election at the end of the month.

Final figures from the poll put the LibDems on 36%, slightly ahead of the Conservatives on 33%. UKIP is in third place with 16% and Labour down in fourth at 13%. If correct, these figures would be a major blow for the Conservative’s grand strategy for the 2015 General Election of taking over 20 seats from the Liberal Democrats and consequently hugely damaging to Cameron’s authority. It would also be a much needed boost to the Liberal Democrats who have so far scored no significant electoral success since the formation of the coalition in 2010.

The impact of Chris Huhne’s resignation?

Last week’s gay marriage vote seems to have had even less impact, with 72% saying it will make no difference and only 13% saying it will make them less likely to vote Conservative compared with 7% who say it will make them more likely. Nearly half (44%) of those who said it would make them less likely to vote Conservative were planning to vote UKIP instead. When asked if they might consider voting for UKIP, 24% of people said ‘Yes’ and a further 12% said ‘Maybe’, giving a total of 36%. Even without Nigel Farage as their candidate, the rise in support for UKIP may well prove to be a decisive factor in denying the Conservatives votes and costing them a potential election win. 50% of those planning to vote UKIP had voted Conservative in the 2010 General Election.

Cameron’s attempt to win back votes from UKIP with his pledge of an EU referendum and renegotiation of powers seems to have had only limited success – less than half (38%) of those planning to vote UKIP said it would make them more inclined to vote Conservative in the by-election, whilst 45% said it would make no difference and 15% said it had actually made them less likely to vote Tory. Across all Eastleigh voters only 18% said Cameron’s pledge had made them more inclined to vote Conservative, 13% less likely and 58% said no difference at all.

*Swings based on precise VI figures to 1 decimal place

Has Chris Huhne’s resignation due to pleading guilty to perverting the course of justice made you more or less likely to vote Liberal Democrat, or will it make no difference to your vote?

Has the passing of a law legalizing gay marriage made you more or less likely to vote Conservative, or will it make no difference to your vote?

Has David Cameron’s pledge to renegotiate powers and hold a referendum on our membership of the EU made you more or less likely to vote Conservative, or will it make no difference to your vote?

Would you consider voting UKIP?

Fieldwork Dates: 6th February – 8th February 2013 Data Collection Method: The survey was conducted via telephone. A combination of random numbers seeded from the complete BT directory of households in the Eastleigh wards and, in addition, a smaller amount of targeted and mobile lifestyle data for specific age brackets were called.

Margin of Error: It should be remembered at all times that a sample of 504 residents aged 18+ were interviewed, and not the entire population. Consequently, all results are subject to margin of error, which mean that not all differences are statistically significant. For example, in a question where 50% (the worst case scenario as far as margin of error is concerned) gave a particular answer, with a sample of 504 we can be 95% certain that the ‘true’ value will fall within the range of 4.4% either side of that 50% figure from the sample.

Data were analysed and weighted by Survation and presented by Patrick Briône and Damian Lyons Lowe.

Survation are a member of The British Polling Council and abide by its rules:
http://www.britishpollingcouncil.org