Which states are most concerned about voter fraud?
Tom Barton and Chris Hanretty

Voter fraud and perceptions of voter fraud are playing an important role in the 2020 US
elections. Due to COVID-19 there is the expectation that the proportion of postal votes
cast will be significantly greater than in 2016, when they made up 24% of all votes.
President Trump has claimed this expansion will lead to increased levels of fraud, whereas
the Democrats claim any attempt to prevent postal vote access is voter suppression. Yet
little attention has been given to how concerned about fraud the voters are.
To explore which areas are more concerned about voter fraud, we surveyed 3,666 voting-
eligible adults about their views on voter fraud and their likelihood of voting.
One (randomly-chosen) half of the sample was asked to consider postal voting
requirements in states without a photo ID requirement:
In some places to cast a vote by post in an election you have to either go in-person
to your local election office, or contact them online or via telephone, and provide
your name and address to be given a postal ballot. Once you have received your
ballot it has to be mailed back with your signature.

In some places to cast a vote by post in an election you have to either go in-person
to your local election office, or contact them online or via telephone, and provide
your name, address and details of your driver’s licence/ state-issued ID to be given
a postal ballot. Once you have received your ballot it has to be mailed back with
your signature and the signature of any other person.

We then asked respondents about their levels of concern with voter fraud on a 0-10 scale
(“Given the above situation would you be concerned about postal vote fraud?”).

Surprisingly, there were no significant differences in levels of concern between the two
groups. We therefore focus on explaining which parts of the country are more concerned
about voter fraud.

To do this, we use multilevel regression and post-stratification (MRP), a technique for
taking large national samples and making predictions for smaller areas like states or
congressional districts by linking respondent and area characteristics with known
demographic and area breakdowns.

Figure 1 shows average levels of concern in each state. The median state (either New
Jersey or Ohio) is close to the midpoint of the scale (5.5); the most concerned state
(Alabama) more than one unit higher, and the least concerned state (Vermont) slightly
further away in the opposite direction.

The figure shows that Republican states (that is, states won by Donald Trump in 2016)
have higher levels of concern about fraud. This is in part a function of partisanship:
Republicans are more concerned about voter fraud than are Democrats. Yet it is also a
function of electoral administration in Republican states. 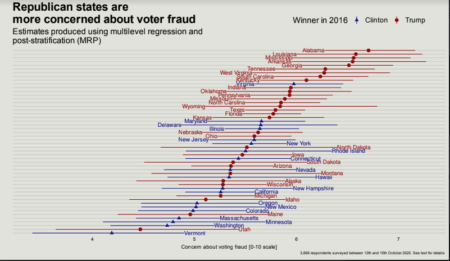 Figure 2 shows the association between each state’s score on the 2018 g https://elections.mit.edu/#/data/map against its
levels of concern. States with higher scores on the EPI – a summary statistic which
includes information on electoral outcomes such as turnout and registration rates together
with information on electoral administration – are states which have lower levels of
concern about voter fraud. 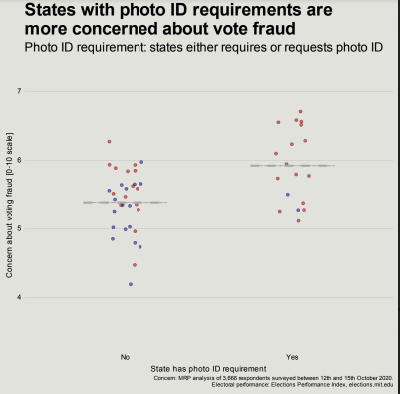 Hopefully the elections will be conducted in good faith, and all votes will be counted – but
to the extent that’s not the case, our analysis shows where some of the flashpoints might
be.

1. The MRP model included as individual level predictors: respondents’ age group, gender,
race, highest level of education, and all combinations of age group and education.
2. The MRP model included as area level predictors: respondent’s congressional district
and state, Democratic candidates’ vote share in the 2016 presidential election and the
2018 congressional elections; the proportion of African Americans in the respondent’s
congressional district; the proportion of white evangelical Protestants in the state; income
per capita in the congressional district.
3. The post-stratification frame is based on American Community Survey data. The post-
stratification target is the voting age population.

Survation is carrying out MRP polling for the US Presidential, Senate and House 2020 elections with Professor Chris Hanretty and Tom Barton from Royal Holloway, University of London. If you would like more information, please contact Survation at researchteam@survation.com