War in Ukraine, the view from Russia

During March 16-17th Survation interviewed 1137 Russian adults online, covering their views on political leaders and institutions, the conflict in Ukraine, news media, messaging and social media use. Data are weighted to the profile of adults in Russia aged 18+

Views on Russia’s “direction” are tightly linked to whether a respondent supports or opposes the Russian military action in Ukraine. Overall, 57% of Russians say the country is going in the “right direction”, 22% “wrong direction (9% saying they don’t know or prefer not to say).  Supporters of the military action in Ukraine are much more convinced Russia is proceeding in the right direction (80%). However, among opponents of the war, 72% say Russia is going in the wrong direction. Those who neither support nor oppose or are unsure have a tepid +4% net view (right – wrong) of Russia’s direction. 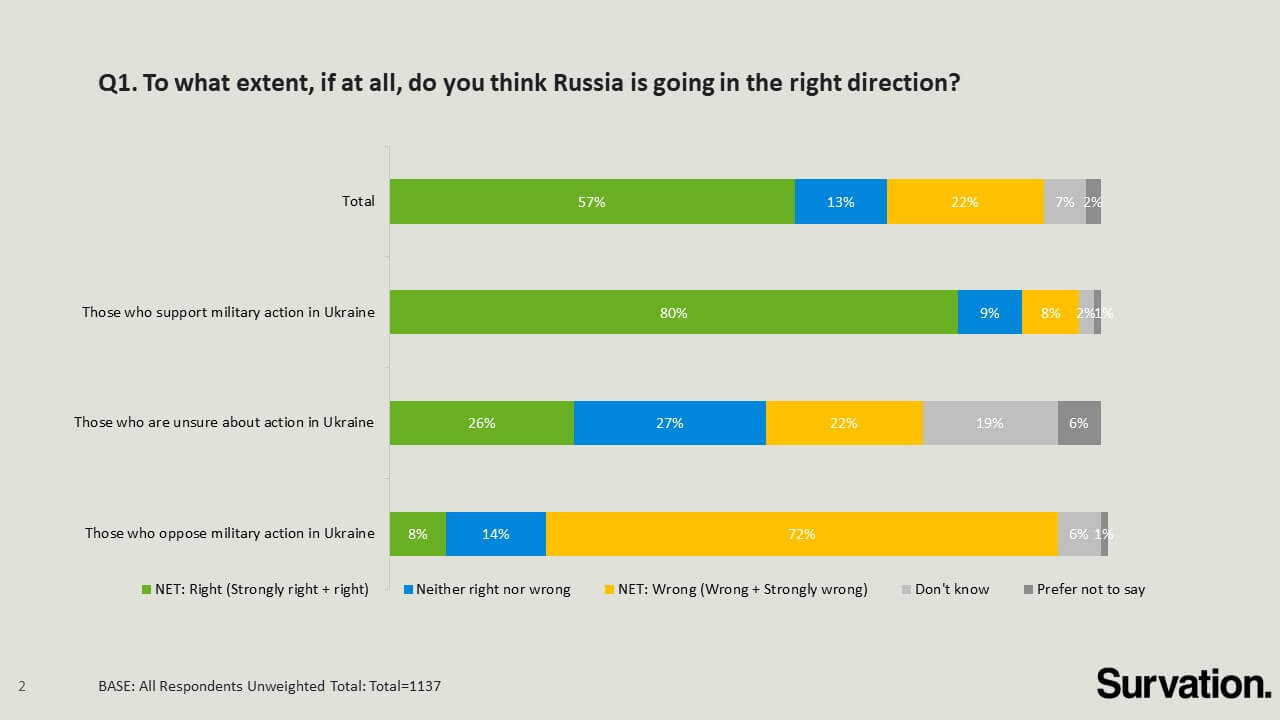 Underpinning understanding of Russian views on war in Ukraine are the ratings of Russia’s military. 71% told Survation they approve or strongly approve of the Russian military. Just 9% disapprove to some extent – a +62% net approval. In comparison, the Russian Orthodox Church has a +37% net approval rating. 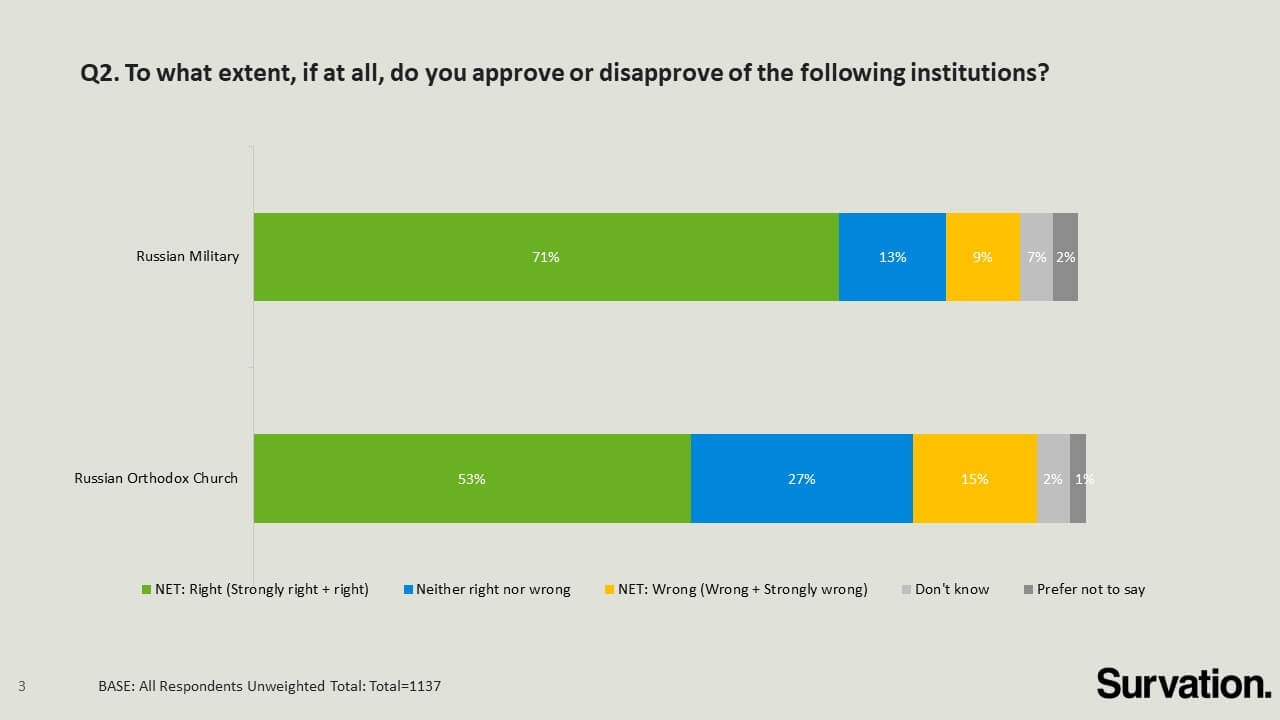 We tested approval ratings among key political and military figures. 66% of the public say they approve (to some degree) of Putin which is similar to, but lower than that seen ahead of the invasion by Russia’s Levada Centre (71%) but somewhat behind Levada’s tracking of Putin’s 80-90% approval rating post the 2014 annexation of Crimea, which was popular among much of the Russian public. 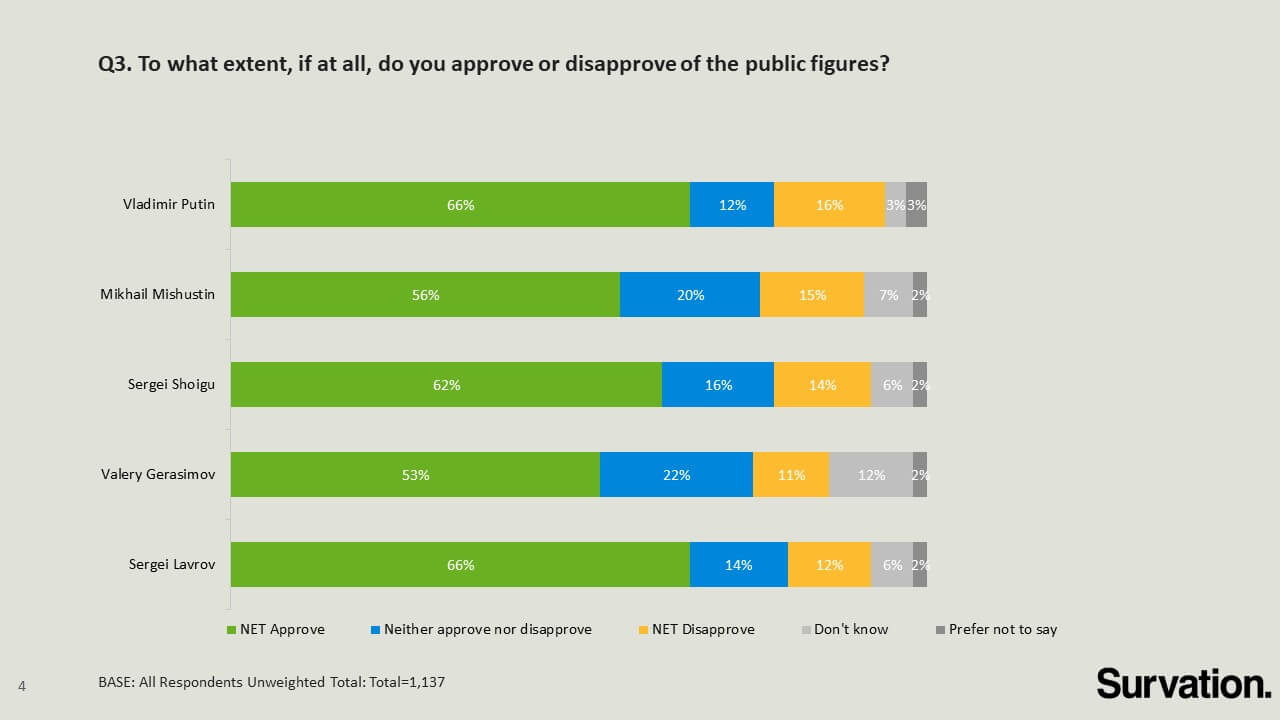 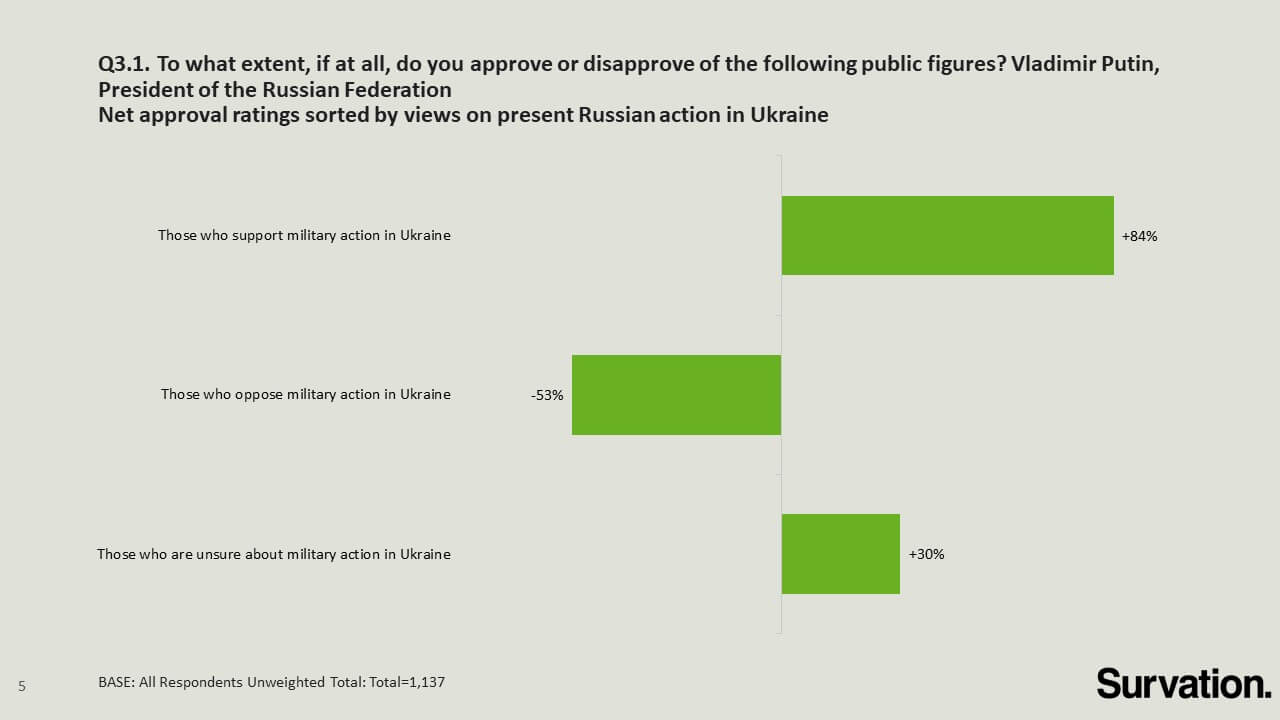 Support for the War?

This is a complex question to understand fully, so it is worthwhile considering what the Russian public believe is Russia’s role in the conflict – and whether they believe this conflict is indeed, a “war”.

A significant majority of Russians (69%) believe the military’s purpose in Ukraine is that of a “Liberator” which is a stated purpose of the Kremlin, linked to the 8-year-old conflict in Donbas. 62% see Russia’s role as “peacekeeper”.  Just 13% see Russia as the “aggressor”.

Regardless of the styling of the war in Ukraine as a “special military operation” by Putin, Russian officials asserting that it is false to call military operations a “war” and the media being banned from using the term, a plurality of Russians (48%), when asked, do term the actions war, although 36% say that it is not, and 16% saying they don’t know.  Russians whose main news sources are internet-based are more likely to call the situation a war (55%) than not (33%). Significantly, 79% of those opposing military action believe it is a war, with only 8% believing the Kremlin definition. 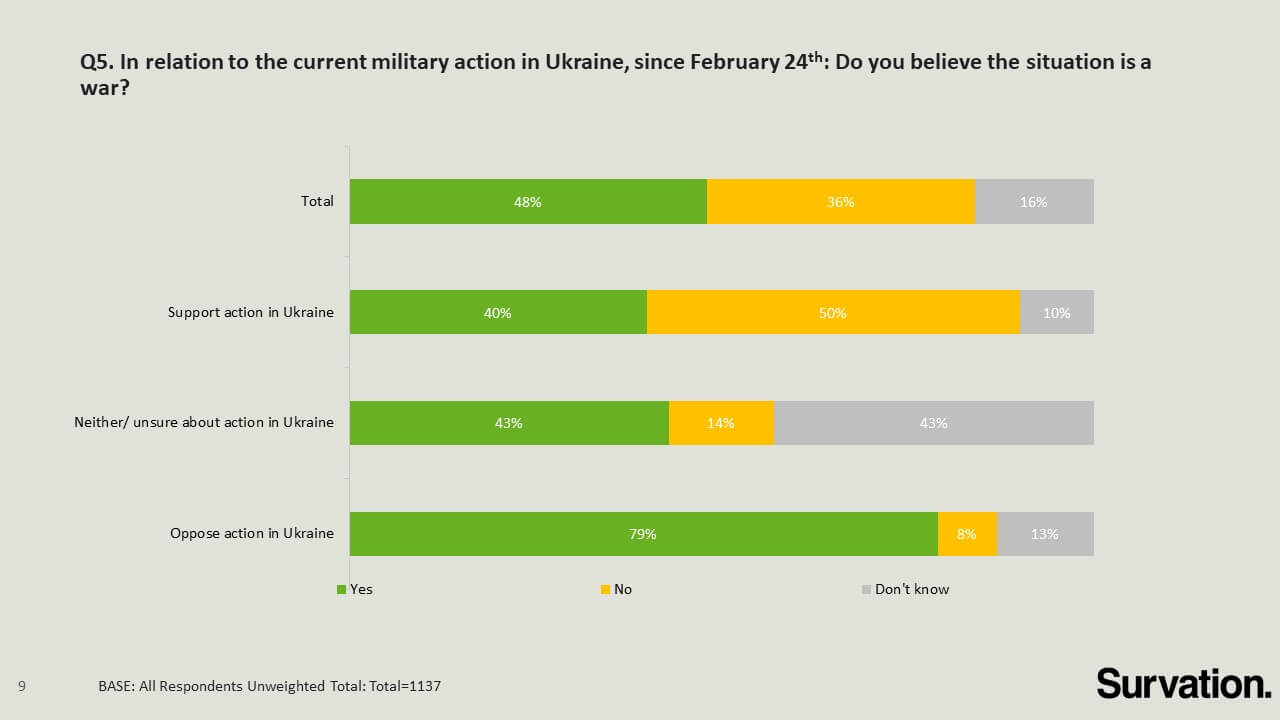 64% of Russians told Survation they either strongly (44%) or otherwise support (20%) the current actions of the armed forces in Ukraine. 17% oppose to some degree, 6% said they don’t know. These figures should be considered in the context that many Russians believe what they are “supporting” is a conflict narrative where Russia is a non-aggressor peacekeeper with a purpose of “liberation”.

Net support of the “current actions” is much higher among those mainly getting their news from state-approved television channels (+78%)  than from the internet generally (+28%).  Among those stating they are not following Russia’s news output from either the internet or television, this (albeit small group) are net opposed (-6%) – an interesting note on the perception of the effectiveness of state-sponsored propaganda. 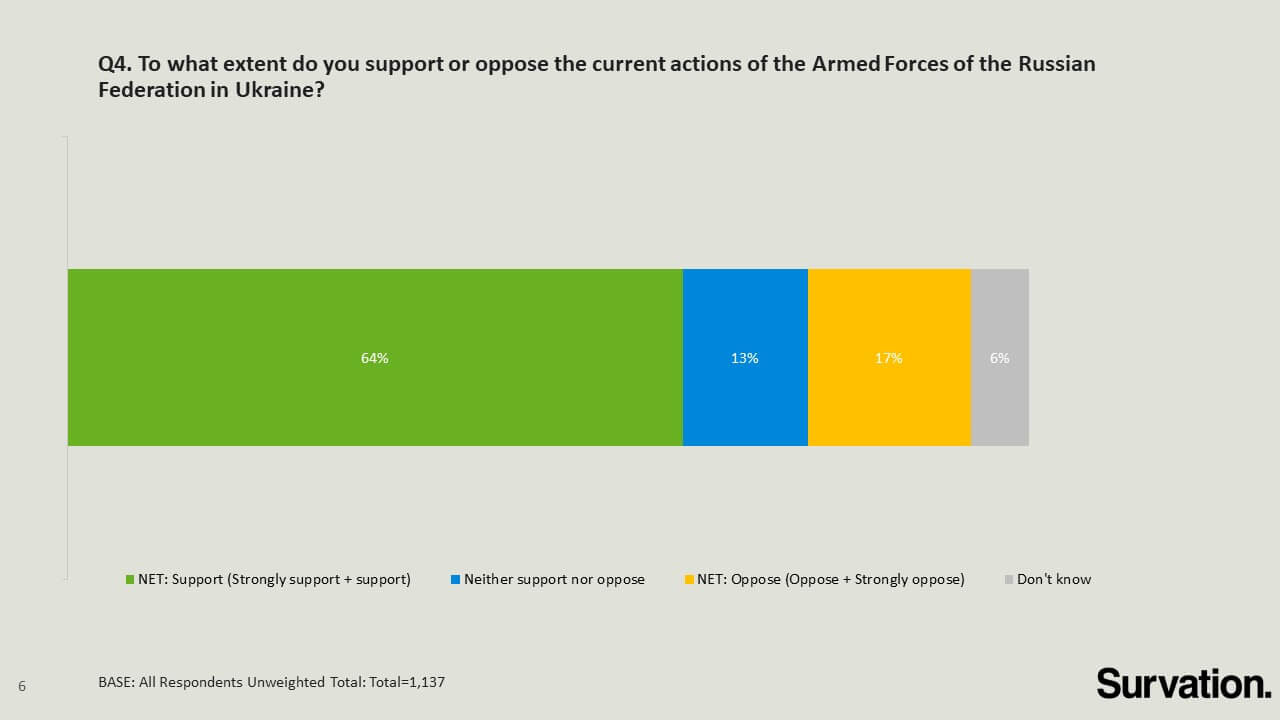 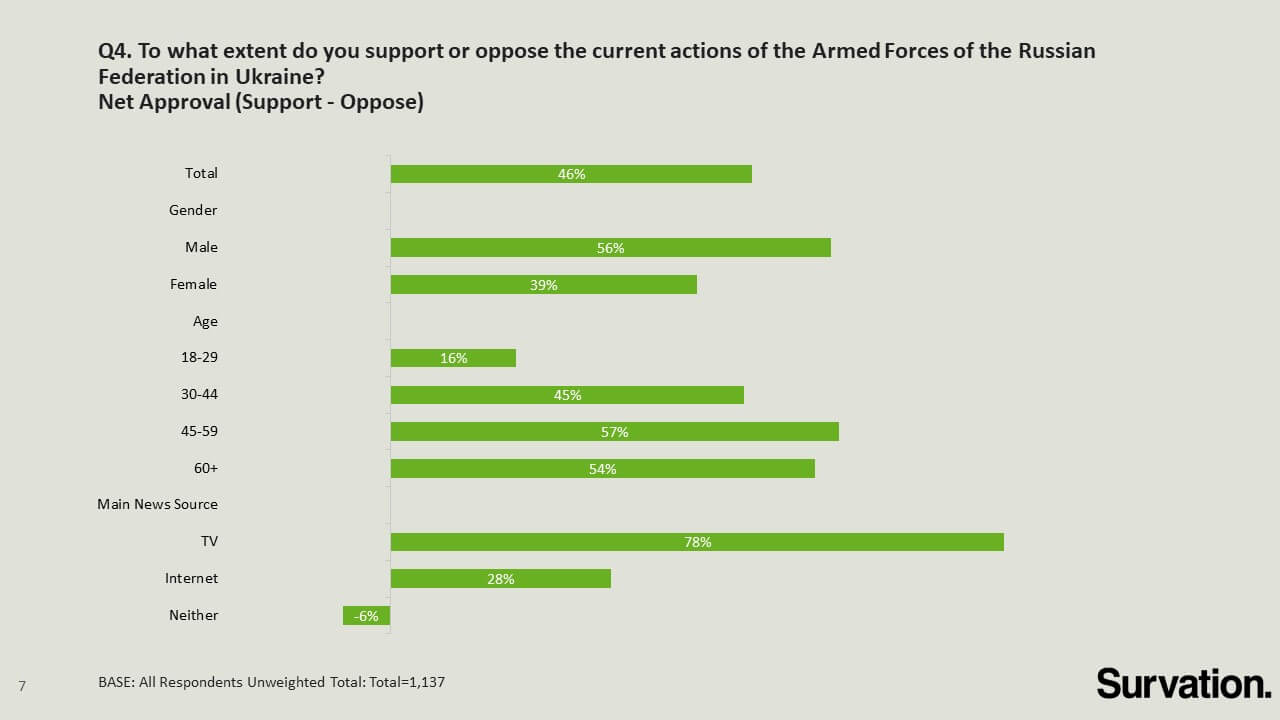 Another consideration in assessing public opinion and support for Putin’s “special military operation” in Ukraine is the expectation of the duration. Russians are not expecting the war in Ukraine to be a long-duration conflict. Just 5% believe the operation will take longer than a year to “conclude”. 38% expect a resolution within 1-2 months. This may have a bearing on future opinion should Russia become mired in wider Ukraine long term. 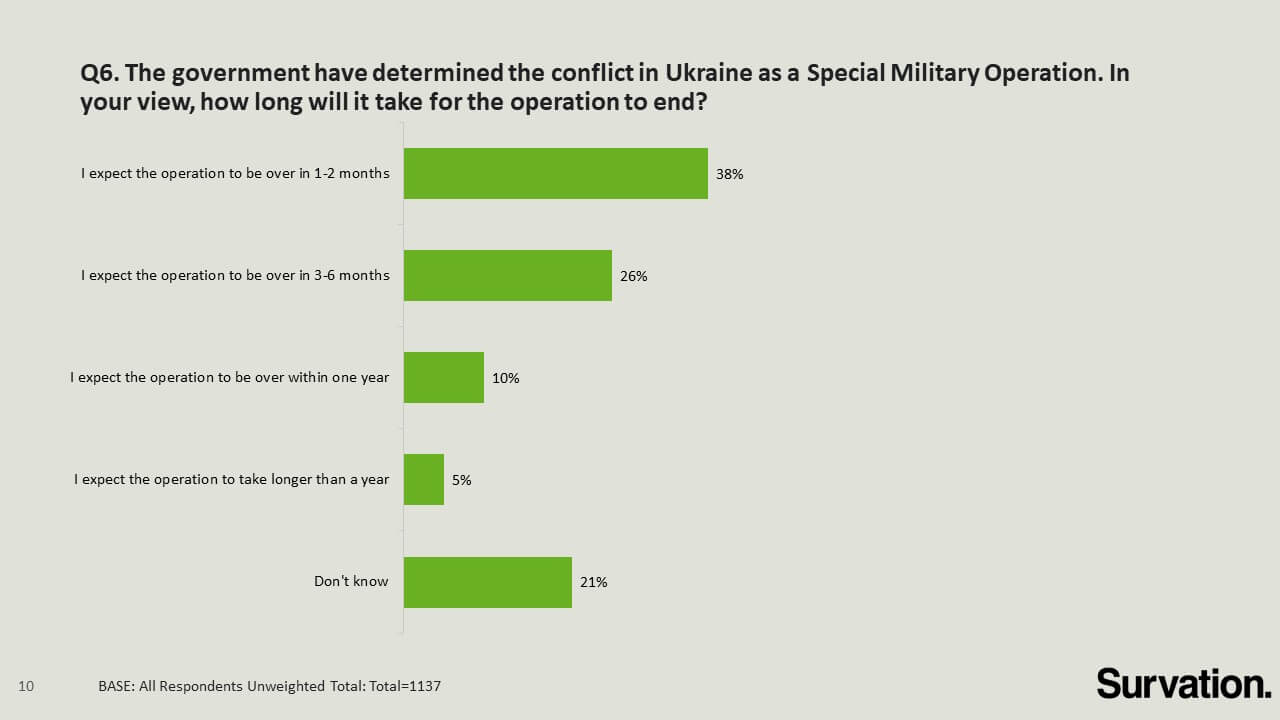 Many in the West believe Putin’s “Special Military Operation” to not be going to plan, a slight majority – 52% of all Russian respondents believe the operation is going well, 34% said they don’t know and 14% “going badly”. Going well rises to 71% among those whose main news source is state approved television, vs 42% saying going well considering those who get their news generally from internet based sources.

While every country in the world recognises Ukraine as a sovereign state, and there is no international recognition of Luhansk and Donetsk, it is notable that Putin’s assertions of Ukraine’s status as part of a historical Greater-Russian empire have cut through to the public. A stark contrast can be seen in comparison with views of the “legitimacy” of the Donbas regions. 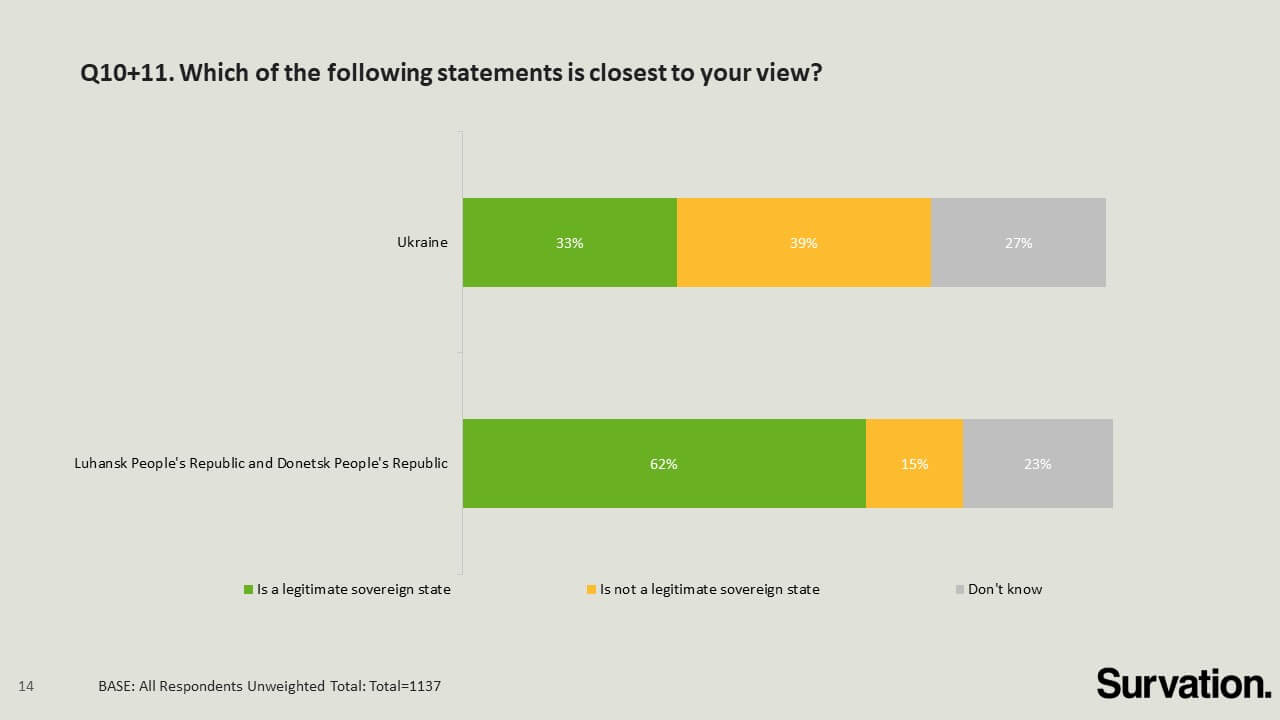 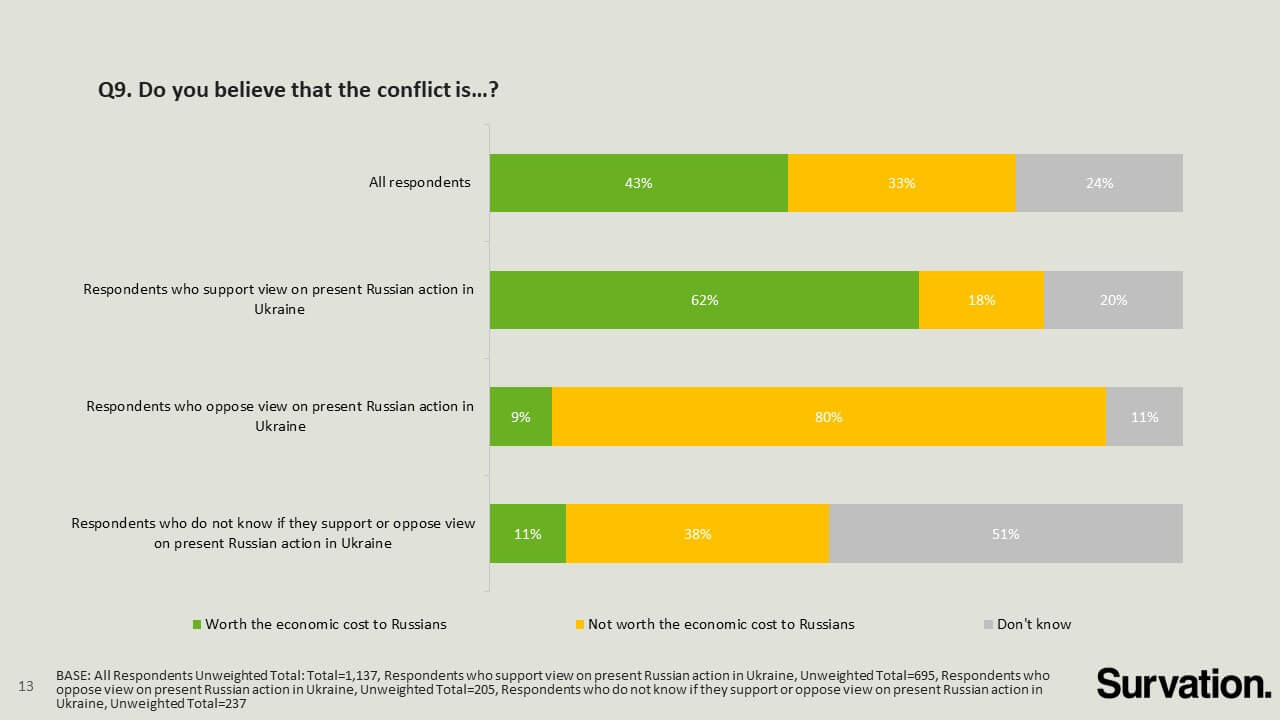 There is a strong belief among the Russian public that the impact of sanctions will see negative effects on inflation, the availability of goods, the value of household savings as well as restricting travel. 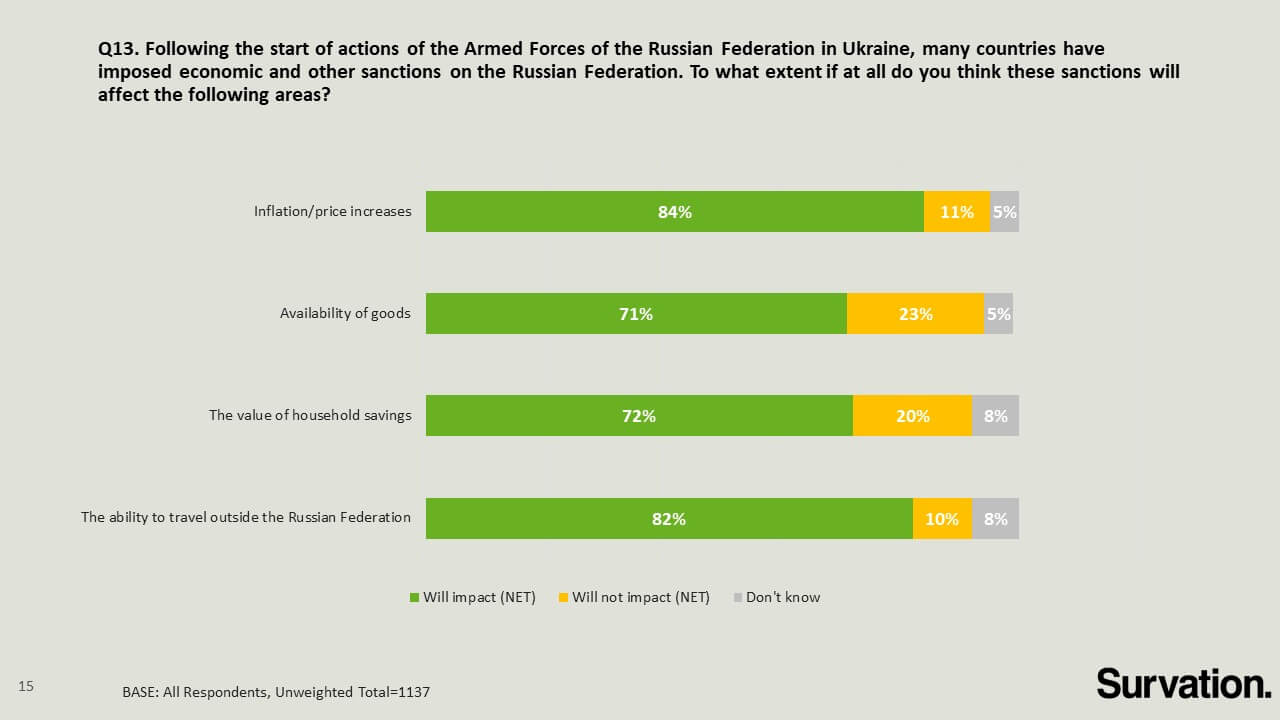 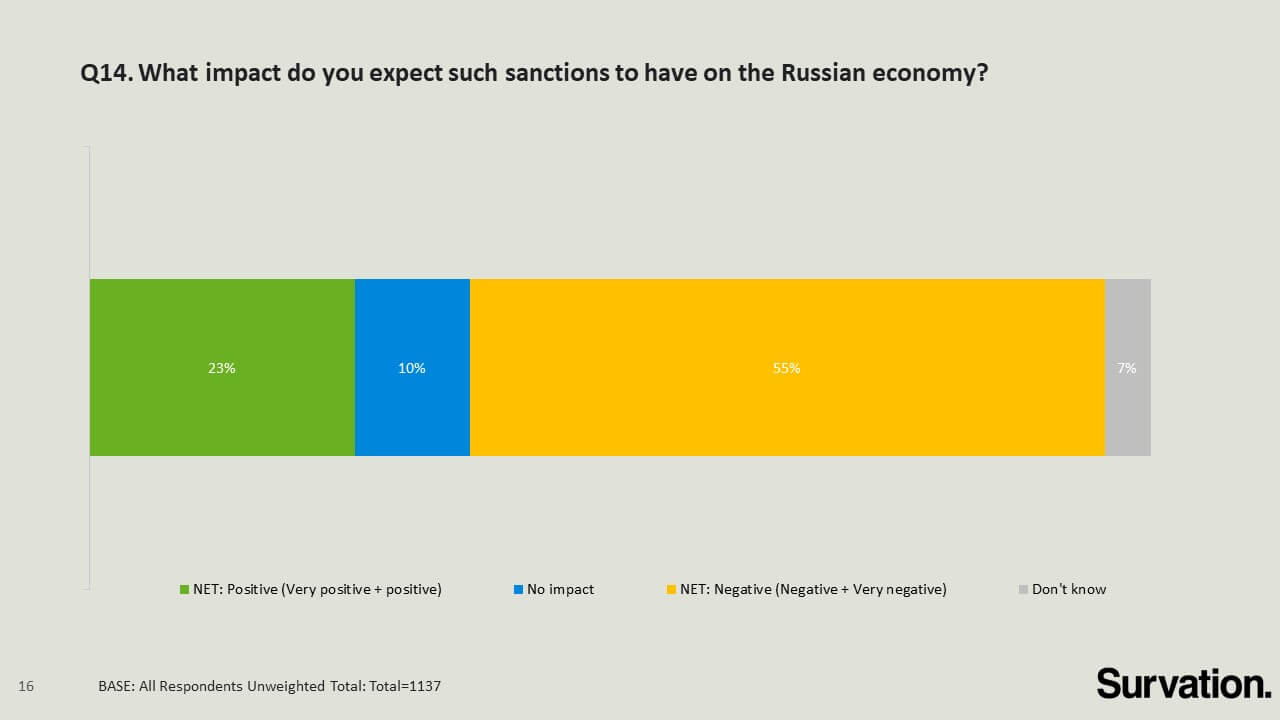 It is illustrative that generally speaking, Russians trust official information about the actions of their Armed Forces when considering opinion on the conflict. Net Trust (Trust minus Do Not Trust) runs at +44%. 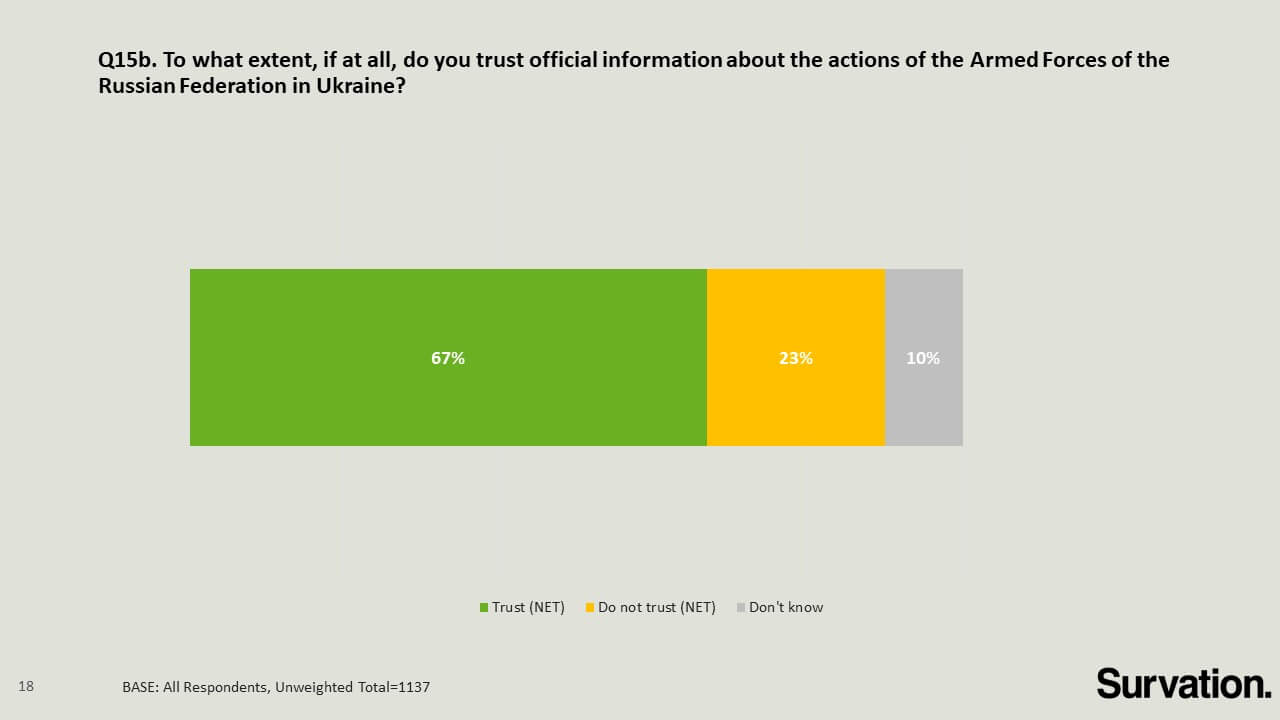 Trust in official information is lower among younger age cohorts 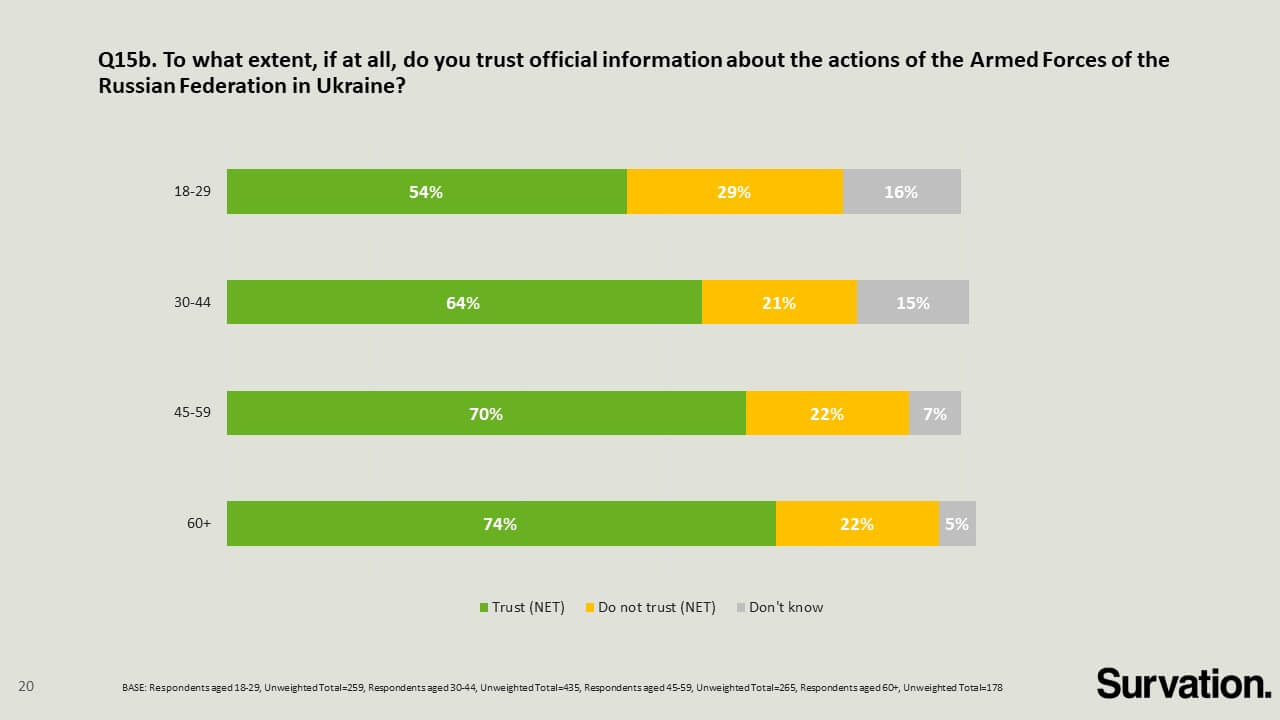 Russians told Survation they are watching a lot of TV and internet -based news, with just 8% saying they are not consuming news via either channel type. 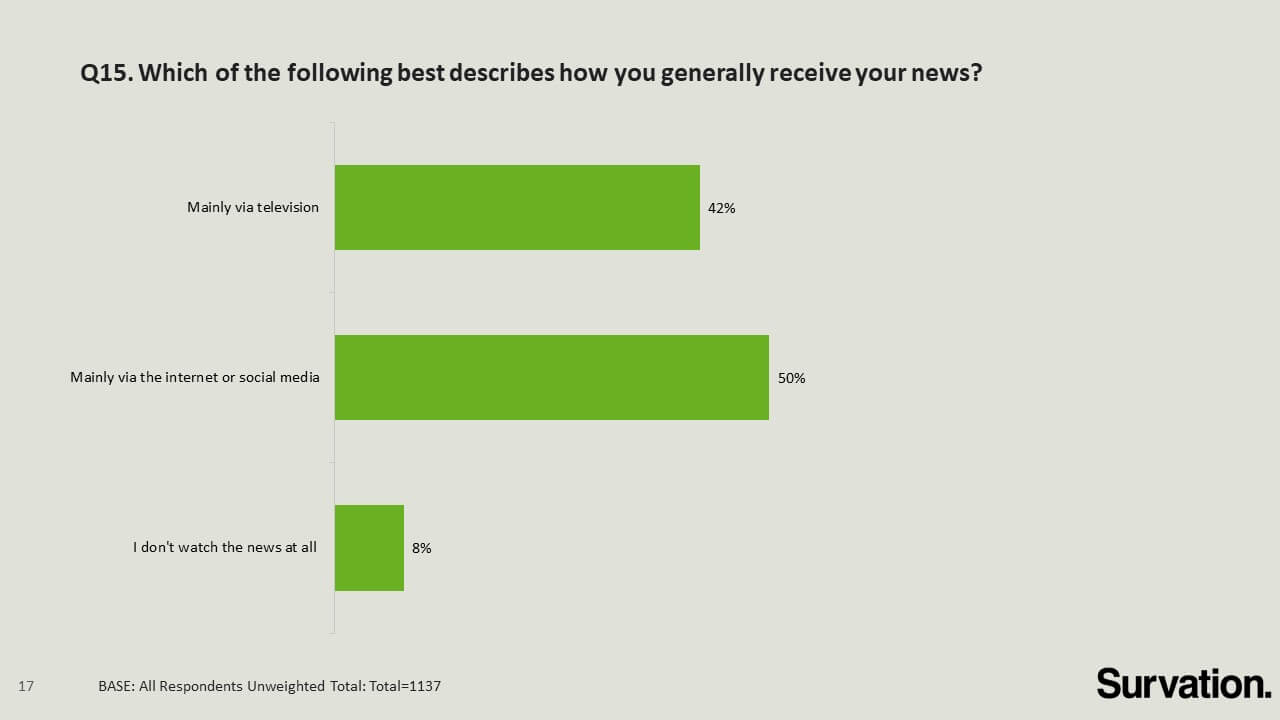 Russians are watching a lot of state-approved television. Among those who are accessing news via TV, around 80% say they are daily viewers of news channels with significant coverage of the conflict. 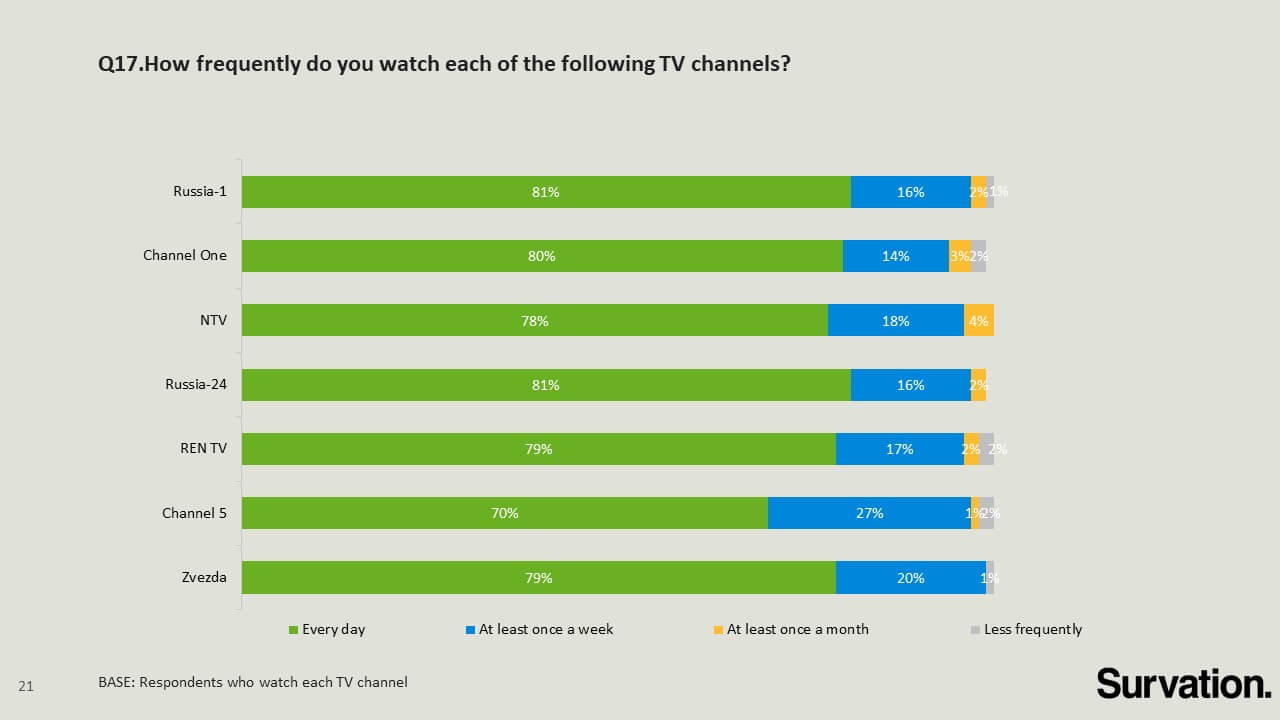 Although those who receive their news broadly via internet based means are less likely to be supportive of Russian actions in Ukraine, it isn’t the case that these people are generally receiving a non-Russian take on events, we can see wide usage of Russia based platforms and networks: 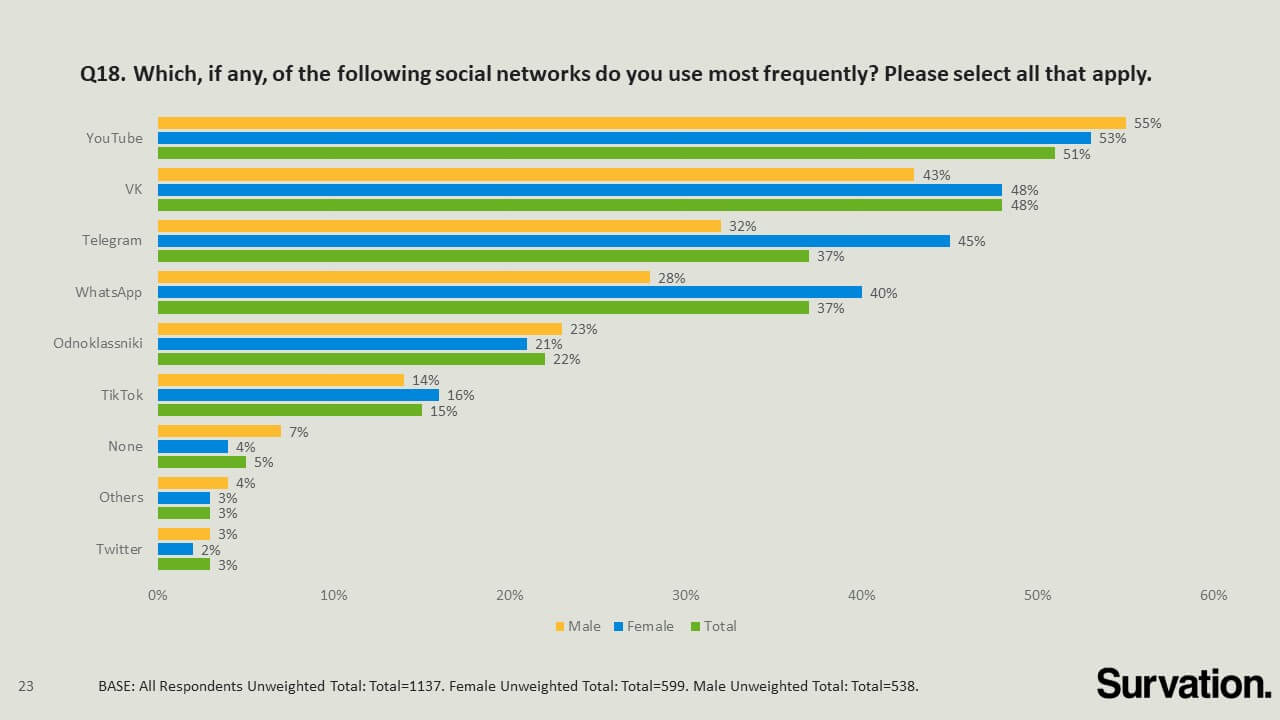