Survation’s latest national voting intention poll, conducted 27th-28th April, shows the Conservatives at 48% holding a commanding 17-point lead over Labour, in spite of continued pressure over the Government’s handling of the COVID-19 lockdown, in particular on personal protective equipment (PPE), testing and the economy.

At 48%, the Conservatives are four points ahead of their winning vote share at the December 2019 general election. Labour’s current figure is 31%, compared to 32% vote share in that election. The Liberal Democrats are polling at 8%, having received 12% of vote share in December. The Green Party, who won 3% of votes,  are currently on 5%, with the Scottish National Party recording 4% of Westminster vote share, as they did in the election. 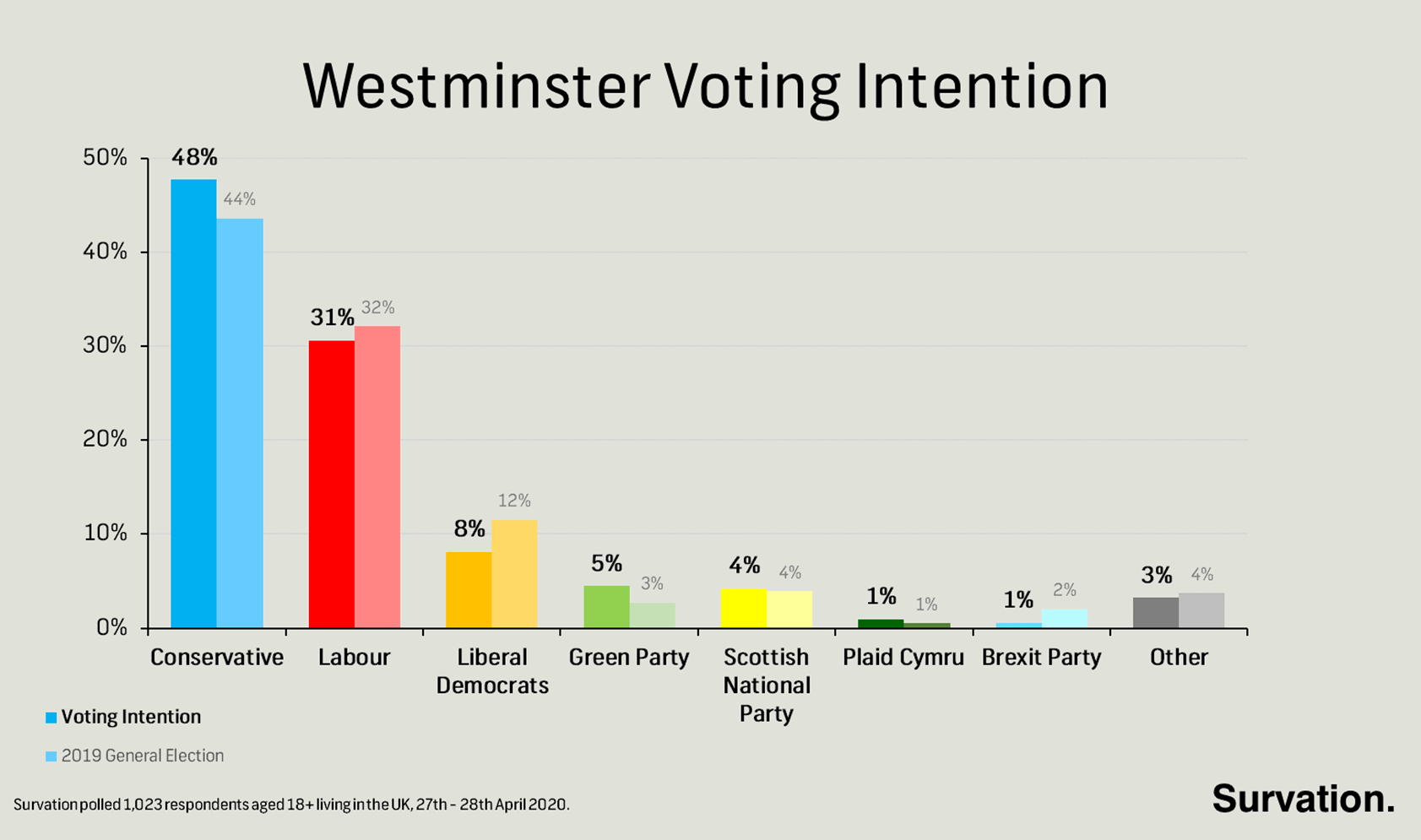 “Brexit Party” was not prompted in the list of parties. Rather, respondents wrote-in their intention to vote for the Brexit Party.

Looking at Conservative and Labour party leaders, Boris Johnson is enjoying a net +39% satisfaction rating, with 61% of respondents satisfied with his performance as Prime Minister, compared to 22% dissatisfied. Keir Starmer, the new Labour Party leader, has a net rating of +13%, including a 29% rate of satisfaction with 16% dissatisfied.

While the Prime Minister has a +26% lead in net ratings over the Leader of the Opposition, there are fewer people dissatisfied with Starmer than with Johnson. However, the coronavirus crisis has inhibited the ‘honeymoon period’ associated with changes in party leadership, where there is intense interest in a new leader.

In this context, and in the absence of the sort of pre-leadership public recognition that Johnson had, understandably there are high numbers of people who have yet to make up their mind about Starmer, who became Labour leader in April. A majority of respondents either said they are neither satisfied nor dissatisfied (43%), or don’t know (12%).

Engaging opinion to inform the future.

To join Survation’s paid consumer opinion panel, simply go to: https://panel.survation.com/ – register (1 minute) and we’ll credit your account with 50 points for simply confirming your email and allocate 100 points for taking a very short survey. Points convert to cash which can be withdrawn each time you reach the equivalent of £50.