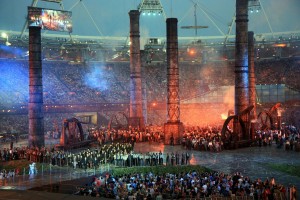 What did the UK public really think about the Olympic Opening Ceremony? Survation polled 1007 viewers as the Ceremony wrapped:

Survation polled 1007 members of the public across the UK for the Daily Star Sunday right after the Olympic Opening ceremony’s finish at Saturday 1am until Saturday 1pm (28th July).

We wanted to to have a clear view on attitudes to some of the key issues and events that occurred during the Ceremony which has been the subject of some media debate.

The figures below do not quote those (around 20% of the sample for each question) who had not yet seen the particular highlight or question topic. Respondents were asked if they strongly agreed, agreed, neither agreed nor diagreed, disgreed somewhat, or disagreed strongly with each statement. The figures quoted are the net agree/disagree percentages, unless “neither” was a significant figure. For clarity, full data tables can be downloaded here:

Danny Boyle’s musical choices were considered to be “entertaining and appropriate” to at least some degree by 55% of those polled (only 11% disagreeing) and the decision to have 7 young athletes light the Olympic flame was a popular one with 60% agreeing with the move and only 8% disagreeing.

Value for money, length of ceremony?

Responders were more split on whether the ceremony was “good value for money”  37% agreeing, 25% disagreeing (16% neutral) and many people considered the Ceremony overlong at 36% versus 26% that didn’t and 15% that were neutral.

Relative Importance of the ceremony

For perspective, the public do consider SPORT to be the most important aspect of the games (versus the opening ceremony) with only 18% considering the ceremony to be more important than the sport – 41% disagreeing with that sentiment.

The BBC’s coverage was considered to be of a high standard by 56% of those polled (10% disagreeing) although the commentating team fared slightly worse than their institution. One could argue that the commentators detracted slightly from the overall experience on that basis, but after the Jubilee coverage controversy this appeared to be a potential minefield that the BBC has carefully avoided.

Was the ceremony “too political” and was content such as the inclusion of NHS nurses an appropriate tribute?

In contrast to (for example) Conservative MP Aidan Burley’s twitter comments considering the ceremony “the most leftie opening ceremony I have ever seen” – only 15% of those surveyed thought the Ceremony was  “too political” with  40% disagreeing with that sentiment and 21% neutral.  Further, referencing Mr. Burley’s negative comments relating to the NHS tribute aspect of the Ceremony “Welfare tribute next?”,  the public considered the inclusion of NHS nurses and patients to be an “appropriate tribute”  -with 52% agreeing and only 12% disagreeing.