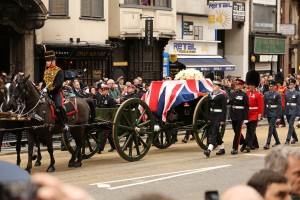 What Honour Should We Accord Our Leaders? A Nation Divided

On behalf of The Daily Mirror, Survation polled 1000 UK adults on the controversy relating to the mourning preparations for Lady Thatcher.

The results revealed sharp differences in attitudes between those in the South of England versus elsewhere, the question format was a series of statements put to the responder, asking for their level of agreement or disagreement. Full data tables can be viewed here:

“The Thatcher family, rather than the taxpayer, should pay the bulk of the estimated £10million cost for Margaret Thatcher’s ceremonial funeral”

Survation interviewed a representative sample of 1000 adults aged 18+ online on 20th-21st March 2013. Data were weighted to the profile of all adults. Survation is a member of the British Polling Council and abides by its rules.